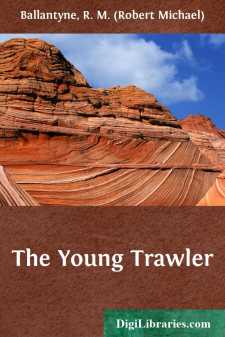 Introduces Deep-Sea Fishermen And their Families.

On a certain breezy morning in October—not many years ago—a wilderness of foam rioted wildly over those dangerous sands which lie off the port of Yarmouth, where the Evening Star, fishing-smack, was getting ready for sea.

In one of the narrow lanes or “Rows” peculiar to that town, the skipper of the smack stood at his own door, grumbling. He was a broad burly man, a little past the prime of life, but prematurely aged by hard work and hard living.

“He’s always out o’ the way when he’s wanted, an’ always in the way when he’s not wanted,” said the skipper angrily to his wife, of whom he was at the moment taking, as one of his mates remarked, a tender farewell.

“Don’t be hard on him, David,” pleaded the wife, tearfully, as she looked up in her husband’s face.

“He’s only a bit thoughtless; and I shouldn’t wonder if he was already down at the smack.”

He stopped abruptly, as he looked down at his wife’s eyes, and the frown faded. No wonder, for that wife’s eyes were soft and gentle, and her face was fair and very attractive as well as refined in expression, though not particularly pretty.

“Well, old girl, come, I won’t be hard on ’im. Now I’m off,—good-day.” And with that the fisherman stooped to kiss his wife, who returned the salute with interest. At the same time she thrust a packet into his hand.

“A Testament, David—from me. It will do your soul good if you will read it. And the tract wrapped round it is from a lady.”

The frown returned to the man’s face as he growled— “What lady?”

“The lady with the curious name, who was down here last summer for sea-bathing; don’t you remember Miss Ruth Dotropy? It is a temperance tract.”

David Bright made a motion as though he were about to fling the parcel away, but he thought better of it, and thrust it into the capacious pocket of his rough coat. The brow cleared again as he left his wife, who called after him, “Don’t be hard on Billy, David; remember he’s our only one—and he’s not bad, just a little thoughtless.”

Lighting a large pipe as he spoke, the skipper of the Evening Star nodded farewell, and sauntered away.

In another of the narrow lanes of Yarmouth another fisherman stood at his own door, also taking leave of his wife. This man was the mate—just engaged—of David Bright’s vessel, and very different in some respects from the skipper, being tall, handsome, fresh and young—not more than twenty-four—as well as powerful of build. His wife, a good-looking young woman, with their first-born in her arms, had bidden him good-bye.

We will not trouble the reader with more of their parting conversation than the last few words....