The Young Surveyor; or Jack on the Prairies 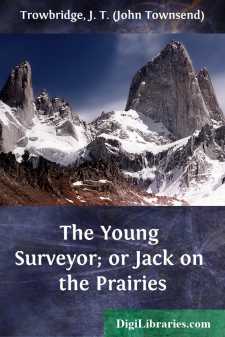 CHAPTER I. "NOTHING BUT A BOY."

A young fellow in a light buggy, with a big black dog sitting composedly beside him, enjoying the ride, drove up, one summer afternoon, to the door of a log-house, in one of the early settlements of Northern Illinois.

A woman with lank features, in a soiled gown trailing its rags about her bare feet, came and stood in the doorway and stared at him.

"I dunno noth'n' to hender. Yer, Sal! run up in the burnt lot and fetch your pap. Tell him a stranger. You've druv a good piece," the woman added, glancing at the buggy-wheels and the horse's white feet, stained with black prairie soil.

"I've driven over from North Mills," replied the young fellow, regarding her pleasantly, with bright, honest features, from under the shade of his hat-brim.

"I 'lowed as much. Alight and come into the house. Old man'll be yer in a minute."

He declined the invitation to enter; but, to rest his limbs, leaped down from the buggy. Thereupon the dog rose from his seat on the wagon-bottom, jumped down after him, and shook himself.

"All creation!" said the woman, "what a pup that ar is! Yer, you young uns! Put back into the house, and hide under the bed, or he'll eat ye up like ye was so much cl'ar soap-grease!"

At that moment the dog stretched his great mouth open, with a formidable yawn. Panic seized the "young uns," and they scampered; their bare legs and exceedingly scanty attire (only three shirts and a half to four little barbarians) seeming to offer the dog unusual facilities, had he chosen to regard them as soap-grease and to regale himself on that sort of diet. But he was too well-bred and good-natured an animal to think of snapping up a little Wiggett or two for his luncheon; and the fugitives, having first run under the bed and looked out, ventured back to the door, and peeped with scared faces from behind their mother's gown.

To hide his laughter, the young fellow stood patting and stroking his horse's neck until Sal returned with her "pap."

"That's my name, stranger. What can I dew for ye to-day?"

"I've come to see what I can do for you, Mr. Wiggett. I believe you want your section corner looked up."

"That I dew, stranger. But I 'lowed 't would take a land-surveyor for that."

"I am a land-surveyor," said the young fellow, with a modest smile.

"A land-surveyor? Why, you're noth'n' but a boy!" And the tall old man, bending a little, and knitting his gray eyebrows, looked down upon his visitor with a sort of amused curiosity.

"That's so," replied the "boy," with a laugh and a blush. "But I think I can find your corner, if the bearings are all right."

"Whur's your instruments?" asked the old man, leaning over the buggy. "Them all? What's that gun to do with land-surveyin'?"

"Nothing; I brought that along, thinking I might get a shot at a rabbit or a prairie hen. But we shall need an axe and a shovel."

"I 'lowed your boss would come himself, in place of sendin' a boy!" muttered the old man, taking up the gun,—a light double-barrelled fowling-piece,—sighting across it with an experienced eye, and laying it down again....