The Young Seigneur Or, Nation-Making 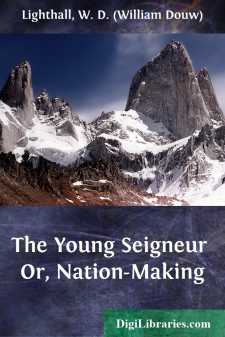 CHAPTER I. THE MANOIR OF DORMILLIÈRE.

In the year One Thousand Eight Hundred and Seventy odd, about six yearsafter the confederation of the Provinces into the Dominion of Canada, anOntarian went down into Quebec,—an event then almost as rare as aQuebecker entering Ontario.

"It's a queer old Province, and romantic to me," said the Montrealer with whom old Mr. Chrysler (the Ontarian) fell in on the steamer descending to Sorel, and who had been giving him the names of the villages they passed in the broad and verdant panorama of the shores of the St. Lawrence.

In truth, it is a queer, romantic Province, that ancient Province of Quebec,—ancient in store of heroic and picturesque memories, though the three centuries of its history would look foreshortened to people of Europe, and Canada herself is not yet alive to the far-reaching import of each deed and journey of the chevaliers of its early days.

Here, a hundred and thirty years after the Conquest, a million and a half of Normans and Bretons, speaking the language of France and preserving her institutions, still people the shores of the River and the Gulf. Their white cottages dot the banks like an endless string of pearls, their willows shade the hamlets and lean over the courses of brooks, their tapering parish spires nestle in the landscape of their new-world patrie.

"What is that?" exclaimed the Ontarian, suddenly, lifting his hand, his eyes brightening with an interest unwonted for a man beyond middle age.

The steamer was passing close to the shore, making for a pier some distance ahead; and, surmounting the high bank, a majestic scene arose, facing them like an apparition. It was a grey Tudor mansion of weather-stained stone, with churchy pinnacles, a strange-looking bright tin roof, and, towering around the sides and back of its grounds a lofty walk of pine trees, marshalled in dark, square, overshadowing array, out of which, as if surrounded by a guard of powerful forest spirits, the mansion looked forth like a resuscitated Elizabethan reality. Its mien seemed to say: "I am not of yesterday, and shall pass tranquilly on into the centuries to come: old traditions cluster quietly about my gables; and rest is here."

"That is the Manoir of Dormillière," replied the Montrealer, as the steamer, whose paddles had stopped their roar, glided silently by.

Impressive was the Manoir, with its cool shades and air of erect lordliness, its solemn grey walls and pinnacled gables, the beautiful depressed arch of its front door; and its dream-like foreground of river mirroring its majestic guard of pines.

"I knew," said Chrysler, "that you had your seigniories in Quebec, and some sort of a feudal history, far back, but I never dreamed of such seats."

"O, the Seigneurs[A] have not yet altogether disappeared," returned the Montrealer. "Twenty years ago their position was feudal enough to be considered oppressive; and here and there still, over the Province, in some grove of pines or elms, or at some picturesque bend of a river, or in the shelter of some wooded hill beside the sea, the old-fashioned residence is to be descried, seated in its broad demesne with trees, gardens and capacious buildings about it, and at no great distance an old round windmill."

[Footnote A: The old French gentry or noblesse]

"Who lives in this one?"