The Young Mother Management of Children in Regard to Health 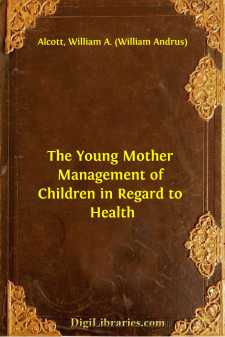 It is far from being in the power of every young mother to procure a suitable room for a nursery. In the present state of society, the majority must be contented with such places as they can get. Still there are various reasons for saying what a nursery should be. 1. It may be of service to those who have the power of selection. 2. Information cannot injure those who have not. 3. It may lead those who have wealth to extend the hand of charity in this important direction; for there are not a few who have little sympathy with the wants and distresses of the adult poor, who will yet open their hearts and unfold their hands for the relief of suffering infancy.

Among those who have what is called a nursery, few select for this purpose the most appropriate part of the building. It is not unfrequently the one that can best be spared, is most retired, or most convenient. Whether it is most favorable to the health and happiness of its occupants, is usually at best a secondary consideration.

But this ought not so to be. A nursery should never, for example, be on a ground floor, or in a shaded situation, or in any circumstances which expose it to dampness, or hinder the occasional approach of the light of the sun. It should be spacious, with dry walls, high ceiling, and tight windows. The latter should always be so constructed that the upper sash can be lowered when we wish to admit or exclude air. It should have a chimney, if possible; but if not, there should be suitable holes in the ceiling, for the purposes of ventilation.

It is highly desirable that every nursery should consist of two rooms, opening into each other; or what is still better, of one large room, with a sliding or swinging partition in the middle. The use of this is, that the mother and child may retire to one, while the other is being swept or ventilated. They would thus avoid damp air, currents, and dust. Such an arrangement would also give the occupants a room, fresh, clean and sweet, in the morning, (which is a very great advantage,) after having rendered the air of the other foul by sleeping in it.

In winter, and while there is an infant in the nursery, just beginning to walk, it is recommended by many to cover the floor with a carpet. The only advantage which they mention is, that it secures the child from injury if it falls. But I have seldom seen lasting injury inflicted by simple falls on the hard floor; and there are so many objections to carpeting a nursery, since it favors an accumulation of dust, bad air, damp, grease, and other impurities, that it seems to me preferable to omit it....