The Young Man in Business 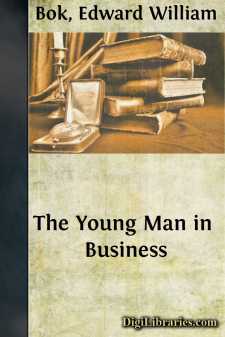 THE YOUNG MAN IN BUSINESS.

A well-known New York millionaire gave it as his opinion not long ago that any young man possessing a good constitution and a fair degree of intelligence might acquire riches. The statement was criticised—literally picked to pieces—and finally adjudged as being extravagant. The figures then came out, gathered by a careful statistician, that of the young men in business in New York City, sixty per cent, were earning less than $1,000 per year, only twenty per cent, had an income of $2,000, and barely five per cent, commanded salaries in excess of the latter figure. The great majority of young men in New York City—that is, between the ages of twenty-three and thirty—were earning less than twenty dollars per week. On the basis, therefore, that a young man must be established in his life-profession by his thirtieth year, it can hardly be said that the average New York young man in business is successful. Of course, this is measured entirely from the standpoint of income. It is true that a young man may not, in every case, receive the salary his services merit, but, as a general rule, his income is a pretty accurate indication of his capacity.

Now, as every young man naturally desires to make a business success, it is plain from the above statement that something is lacking; either the opportunities, or the capabilities in the young men themselves. No one conversant with the business life of any of our large cities can, it seems to me, even for a single moment, doubt the existence of good chances for young men. Take any large city as a fair example: New York, Boston, Philadelphia, or Chicago, and in each instance there exist more opportunities than there are young men capable of embracing them. The demand is far in excess of the supply. Positions of trust are constantly going begging for the right kind of young men to fill them. But such men are not common; or, if they be, they have a most unfortunate way of hiding their light under a bushel, so much so that business men cannot see even a glimmer of its rays. Let a position of any real importance be open, and it is the most difficult kind of a problem to find any one to fill it satisfactorily. Business men are constantly passing through this experience. Young men are desired in the great majority of positions because of their progressive 'ideas and capacity to endure work; in fact, "young blood," as it is called, is preferred in nine positions out of every ten, nowadays.

The chances for business success for any young man are not wanting. The opportunities exist, plenty of them. The trouble is that the average young man of to-day is incapable of filling them, or, if he be not exactly incapable (I gladly give him the benefit of the doubt), he is unwilling to fill them, which is even worse. That exceptions can be brought up to controvert I know, but I am dealing with the many, not with the few.

The average young man in business to-day is nothing more nor less than a plodder,—a mere automaton. He is at his office at eight or nine o'clock in the morning; is faithful in the duties he performs; goes to luncheon at twelve, gets back at one; takes up whatever he is told to do until five, and then goes home....