The Young Lieutenant or, The Adventures of an Army Officer 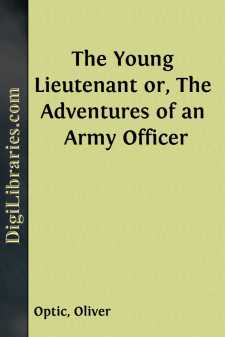 CAPTAIN DE BANYAN AND OTHERS

“I beg your pardon, sir; but I see, by the number on your cap, that we belong to the same regiment,” said an officer with two bars on his shoulder-straps, as he halted in the aisle of the railroad-car, near where Lieutenant Thomas Somers was seated. “May I be permitted to inquire whom I have the honor of addressing?”

“Lieutenant Somers, of the ——th Massachusetts,” replied the young gentleman addressed, as he politely touched his cap in return for the salutation of the other.

“Ah! is it possible? I am rejoiced to meet you. I have heard of you before. Allow me to add in the most delicate manner, that you are a good fellow, a first-rate soldier, and as brave an officer as ever sported a pair of shoulder-straps. Permit me to offer you my hand; and allow me to add, that it is a hand which was never sullied by a dishonorable act.”

“I am happy to make your acquaintance,” replied Lieutenant Somers, as he accepted the offered hand. “Won’t you take a seat, Captain——”

“Captain de Banyan, at your service,” continued the officer, as he seated himself by the side of the young lieutenant, who was completely bewildered by the elegant and courtly speech of his new-found friend.

If Lieutenant Somers needs any further introduction to the reader, we may briefly add, that he was a native of Pinchbrook, a town near Boston, in the State of Massachusetts. He was now entering his eighteenth year, and had enlisted in the great army of the Union as a private, with an earnest and patriotic desire to serve his imperiled country in her death-grapple with treason and traitors. He had won his warrant as a sergeant by bravery and address, and had subsequently been commissioned as a second lieutenant for good conduct on the bloody field of Williamsburg, where he had been wounded. The injury he had received, and the exhaustion consequent upon hard marching and the excitement of a terrible battle, had procured for him a furlough of thirty days. He had spent this brief period at home; and now, invigorated by rest and the care of loving friends, he was returning to the army to participate in that stupendous campaign which culminated in the seven-days’ battles before Richmond.

Inspired by the hope of honorable distinction, still more by the patriotic desire to serve the noblest cause for which the soldier ever drew a sword, he was hastening to the post of danger and duty. As the train hurried him by smiling fields, and through cities and villages whose prosperity was mysteriously interlinked with the hallowed mission which called him from the bosom of home and friends, his thoughts were those which would naturally animate the soul of a young patriot, as he journeyed to the battle-fields of a nation’s ruin or salvation. He thought of the bloody scenes before him, of the blessed home behind him.

Only the day before, he had made his parting visit to Lilian Ashford, who knit his “fighting socks,” as he had called them since the eventful day when he had found her letter and her picture in them....