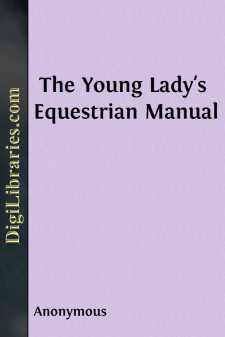 Riding on Horseback is, confessedly, one of the most graceful, agreeable, and salutary of feminine recreations. No attitude, perhaps, can be regarded as more elegant than that of a lady in the modern side-saddle; nor can any exercise be deemed capable of affording more rational and innocent delight, than that of the female equestrian. Pursued in the open air, it affords a most rapid, and, at the same time, exhilarating succession of scenic changes, at a degree of personal exertion, sufficient to produce immediate pleasure, without inducing the subsequent languor of fatigue.

Nor is riding on horseback attended with that danger to ladies, attributed to it by the indolent, the melancholy, and the timid. Accidents, indeed, in the side-saddle, are of extremely rare occurrence. Strange as it may seem, it is, however, an incontrovertible fact, that horses, in general, are much more docile and temperate, with riders of the fair sex, than when mounted by men. This may be attributed, partially, to the more backward position, in the saddle, of the former than the latter; but, principally, perhaps, to their superior delicacy of hand in managing the reins.

As an active recreation, and a mode of conveyance, riding on horseback appears to have been of very remote usage among our fair countrywomen. During a long period, indeed, it was the only one known to, or, adopted by them, for the performance of journies. Such, too, appears to have been the case (with some modifications) in other European countries. The only voiture of the French, says Garsault, until the reign of Charles the Sixth, was the back of the horse or mule: neither Kings, Queens, Princes, nor subjects were acquainted with any other. In the time of that monarch, litters, borne by two horses, first appeared; but these were uncovered, and used, only, by ladies of the court. Froissart describes Isabel, the second wife of Richard the Second of England, as having been borne “en une litière moult riche, qui etoit ordonnèe pour elle;” and this kind of vehicle, during the reigns of several succeeding Monarchs, appears to have been used by women of distinction in this country, but, only, it is to be observed, in cases of illness, or on occasions of ceremony. For example,—when Margaret, daughter of Henry the Seventh, went into Scotland, she generally rode “a faire palfrey;” while, after her, was conveyed “one vary riche litere, borne by two faire coursers, vary nobly drest; in the which litere the sayd Queene was borne in the intrying of the good townes, or otherwise, to her good playsher.”

Towards the end of the thirteenth century, vehicles with wheels, for the use of ladies, were first introduced. They appear to have been of Italian origin, as the first notice of them is found in an account of the entry of Charles of Anjou into Naples; on which occasion, we are told, his queen rode in a careta, the outside and inside of which were covered with sky-blue velvet, interspersed with golden lilies. Under the Gallicised denomination of char, the Italian careta, shortly afterwards became known in France; where, so early as the year 1294, an ordinance was issued by Philip the Fair, forbidding its use to citizens’ wives. Nor was England far behind in the adoption of the vehicle; for, in “The Squyr of Low Degree,” a poem supposed to have been written anterior to the time of Chaucer, we find the father of a royal lady promising that she shall hunt with him, on the morrow, in “a chare,” drawn by

“Jennettes of Spain that ben so white,Trapped to the ground with velvet bright.”

“It shall be covered with velvet red,And clothes of fine gold all about your head;With damask white and azure blue,Well diapered with lilies blue.”

However richly ornamented, the careta, char, or chare—and there is little, if any, doubt, to be entertained as to their identity—may have been, it was, probably, a clumsy, inelegant, and inconvenient structure; for its employment appears to have been far from general among high-born ladies, even on occasions of ceremony and pomp....