The Young Farmer: Some Things He Should Know 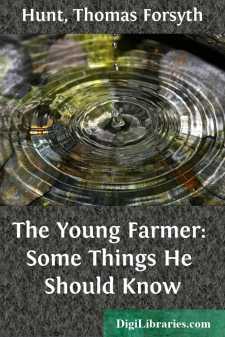 CHAPTER I ESSENTIALS OF SUCCESS

Columella, the much traveled Spanish-Roman writer of the first century A. D., said that for successful farming three things are essential: knowledge, capital and love for the calling. This statement is just as true today as it was when written 1900 years ago by this early writer on European agriculture.

Every man who loves the calling and has an ambition to become a successful farmer should understand that no two of these essentials are sufficient, but that all three are necessary. Although this is so simple as to be almost axiomatic, it is indeed surprising how few people believe a knowledge of farming is really essential to success.

America is strewn with cases of failure, in farming, by men investing capital acquired in other business. In nine cases out of ten failure has been due to lack of knowledge of farming.

There is known to the writer an expert mineralogist and metallurgist. On the subject of coal and gold mining he can give the most valuable information. His advice is constantly sought on all such matters. Instead of investing his money in mining, on which he is a recognized authority, he has invested it in a farm, about which he knows next to nothing. He has not even had the advantage of being raised on a farm, since his father was a railroad man.

A mechanical engineer remarked that if he had $25,000 he would invest it in a farm. This man is supposed to be an expert in business methods as applied to manufacturing in general, and he is especially conversant with the manufacture and trade in automobiles. About all he has seen of farming he has observed from the window of a Pullman car or from the steering wheel of an automobile. Instead of investing his earnings in some manufacturing business, about which he has spent years of study and in which he has had some training, he would invest it in farming, of which he has only the most rudimentary knowledge, if only he had sufficient capital. As a matter of fact, he is more in need of knowledge than of capital.

Even farmers of experience do not always realize the training required to succeed in farming. A letter was received by the dean of a certain agricultural college saying that a graduate of another agricultural college had taken one of the poorest farms in his neighborhood and was raising better potatoes than anyone else could raise. The letter asked that information be sent by return mail as to how this young man could be beaten in raising potatoes. Of course the answer had to be sent that while information upon raising potatoes could easily be supplied, although not in the limits of an ordinary letter, the training in observation, judgment and reasoning faculties essential to meet the daily problems as they arise could not be supplied.

There is no objection to men of other vocations adopting farming as an avocation if they can afford it. It is a rational form of pleasure for wealthy people, and one in which they can often be of great service. This cannot be said of all forms of relaxation....