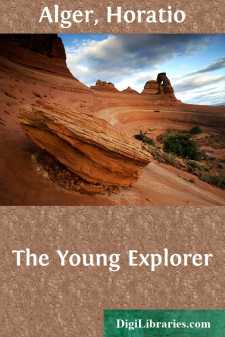 "I've settled up your father's estate, Benjamin," said Job Stanton. "You'll find it all figgered out on this piece of paper. There was that two-acre piece up at Rockville brought seventy-five dollars, the medder fetched a hundred and fifty, the two cows—"

"How much does it all come to, Uncle Job?" interrupted Ben, who was impatient of details.

"Hadn't you better let me read off the items, nephew?" asked Job, looking over his spectacles.

"No, Uncle Job. I know you've done your best for me, and there's no need of your going through it all. How much is there left after all expenses are paid?"

"That's what I was a-comin' to, Ben. I make it out that there's three hundred and sixty-five dollars and nineteen cents. That's a dollar for every day in the year. It's a good deal of money, Ben."

"So it is, Uncle Job," answered Ben, and he was quite sincere. There are not many boys of sixteen to whom this would not seem a large sum.

"It's more than I expected, uncle. I want you to take fifteen dollars and nineteen cents. That'll leave me just three hundred and fifty."

"Why should I take any of your money, nephew?"

"You've had considerable trouble in settling up the estate, and it's taken a good deal of your time, too."

"My time ain't of much vally, and as to the trouble, it's a pity ef I can't take some trouble for my brother's son. No, Ben, I won't take a cent. You'll need it all."

"But you said yourself it was a good deal of money for a boy, UncleJob."

"So it is, but it's all you've got. Most boys have fathers to take care of 'em, while you're alone in the world."

"Yes I am alone in the world," said Ben sadly, his cheerful face clouding over.

"But you've got an uncle, lad," continued Job Stanton, laying his hand gently on the boy's shoulder. "He's a poor man, but as much as in him lies, he'll be your friend and helper."

"I know it, Uncle Job. You've always been kind to me."

"Ef you'll stay with me and help me in the shop, I'll give you a home, such as it is, and fifty dollars a year toward your clothes. Your Aunt Hannah and your Cousin Jane want you to make your home with us."

"You needn't be, boy. It's a sort of mutooal arrangement. It'll be as good for me as for you. You can put your money in the bank, and let it stay till you're twenty-one. Why, it'll be nigh on to five hunderd dollars by that time."

"I'm much obliged to you, Uncle Job, as I said before, but there's one thing in the way."

"Perhaps it isn't genteel enough for you, Ben," said his uncle.

"I don't care for that, Uncle Job, but I don't like being shut up in a shop. Besides, it doesn't give steady work. Last year you were without work at least a third of the time."