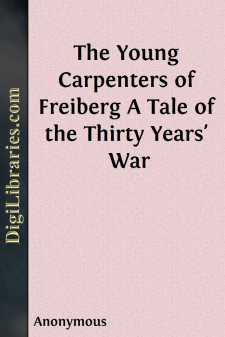 THE MILLER'S WIFE OF ERBISDORF.

The ancient and free mountain city of Freiberg lies only about five-and-twenty miles south-west of Dresden, yet has a far more severe climate than the Saxon capital—a fact that may be understood if we remember that the road which leads from Dresden to Freiberg is up hill almost all the way. The Saxon Erzgebirge must not be pictured as a chain of separate mountains, with peaks rising one behind the other and closing in the horizon. Hills and valleys lie mingled, assuming such long, wave-like forms that in some parts of the district it is difficult to fancy oneself in a mountain-land at all. Immediately around Freiberg the landscape takes the form of a wide table-land, which has an upward slope only on the south-west of the city, so that from a short distance but little is seen of the town save the tops of its towers and a confused glimpse of house-roofs. In former days it was the residence of the Duke of Saxony, and before the Thirty Years' War contained 32,000 inhabitants, a number which has now dwindled to 19,000. Its ancient fortifications, which of late years have been rapidly giving place to modern improvements, consisted of a double line of walls, guarded by towers, pierced by strongly-fortified gates, and surrounded by a deep and wide moat. The ramparts were built of quarried stone, which, though much harder than sandstone, was far more difficult to bind together with mortar. In view of this fact, we may well be surprised that a place so weakly fortified was able for two long months to withstand the vehement siege operations of the whole Swedish army—an army so brave and so highly trained in the art of war, that it had subdued many far stronger fortresses. Yet so it was: how the thing came about, and what an important part young Conrad, the carpenter's apprentice, played in these great events, will be found narrated in the following pages.

On the 1st of November in the year 1642, a carpenter's apprentice, Conrad Schmidt by name, passed out at the Erbis Gate of Freiberg, pushing before him a covered hand-truck. This contained a piece of carpenter's work that always tells its own sad story—a little child's coffin. As the truck with its sorrowful burden jolted along over the rough pavement, the sentry stepped forward from the gate, and asked inquisitively, 'What have you there, youngster, and where are you off to?'

'Only a child's coffin for the mill at Erbisdorf.'

'What! has the plague been gleaning among the little brood down there?'

'The plague!' repeated Conrad, bringing his truck to a stand. 'Well, yes, something like it. Now-a-days the soldiers are the worst plague, and it was one of them that put an end to the miller's little son.'

'Why, Master Prieme,' replied the youth, 'are you the only man in Freiberg who has not heard the cruel story?'

'How should I know anything about it?' answered the citizen. 'I only came home from Dresden late last night, and I had to mount guard early this morning. What has happened to the miller's son?'

'The day before yesterday, in the afternoon,' said the lad, 'a soldier came to the mill at Erbisdorf and demanded quarters for himself and a woman that he said was his wife....