The Young Alaskans on the Trail 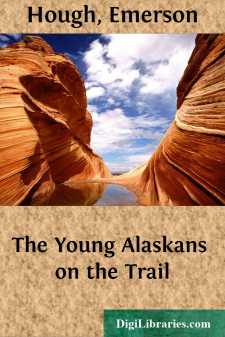 It was a wild and beautiful scene which lay about the little camp in the far-off mountains of the Northwest. The sun had sunk beyond the loftier ridges, although even now in the valley there remained considerable light. One could have seen many miles over the surrounding country had not, close at hand, where the little white tent stood, the forest of spruce been very dense and green. At no great distance beyond its edge was rough and broken country. Farther on, to the southward, stood white-topped peaks many miles distant, although from the camp these could not be seen.

It might have seemed a forbidding scene to any one not used to travel among the mountains. One step aside into the bush, and one would have fancied that no foot had ever trod here. There was no indication of road or trail, nor any hint of a settlement. The forest stood dark, and to-night, so motionless was the air, its silence was more complete than is usually the case among the pines or spruces, where always the upper branches murmur and whisper among themselves. Such scenes cause a feeling of depression even among grown persons who first meet them; and to-night, in this remote spot, one could not well have blamed the three young occupants of this camp had they felt a trifle uneasy as the twilight drew on toward darkness.

They were, it is true, not wholly new to camp life, these three boys—Rob McIntyre, John Hardy, and Jesse Wilcox. You may perhaps call to mind the names of these, since they are the same who, more than a year before, were cast away for some time on the slopes of Kadiak Island, in the far upper portion of Alaska; from which place they were at last rescued in part by their own wits and in part by the watchfulness of their guardian, Mr. Hardy. The latter, whom all three boys called Uncle Dick, was a civil engineer who, as did the parents of all the boys, lived in the coast town of Valdez, in far-off Alaska.

When Rob, John, and Jesse returned home from their dangerous adventures on Kadiak Island, they had been told that many a day would elapse before they would be allowed to take such chances again. Perhaps Uncle Dick never really told the parents of the boys the full truth about the dangers his young charges had encountered on Kadiak Island. Had he done so they would never have been willing for the boys to take another trip even more dangerous in many ways—the one on which they were now starting.

But Uncle Dick Hardy, living out of doors almost all the time on account of his profession as an engineer, was so much accustomed to dangers and adventures that he seemed to think that any one could get out of a scrape who could get into one. So it was not long after the return from Kadiak before he forgot all about the risks the boys had run there. The very next year he was the first one to plead with their parents, and to tell them that in his belief the best way in the world for the boys to pass their next summer’s vacation would be for them to cross the Rocky Mountains from the Pacific side and take the old water trail of the fur-traders, north and east, and down the Peace River from its source....