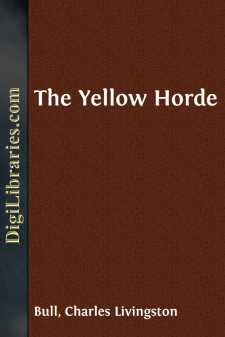 The wolfer lay in his cabin and listened to the first few night sounds of the foothills. The clear piping notes of migrating plover floated softly down to him, punctuated by the rasping cry of a nighthawk. A coyote raised his voice, a perfect tenor note that swept up to a wild soprano, then fell again in a whirl of howls which carried amazing shifts of inflection, tearing up and down the coyote scale. One after another added his voice to the chorus until it seemed that the swelling volume could be produced by no less than a full thousand musical prairie wolves scattered through the foothills for a score of miles.

Wild music to the ears of most men, the song of flat wastes and deserts and limitless horizons, freighted with a loneliness which is communicated to man in a positive ache for companionship,—and which carries a wealth of companionship in itself for those who have lived so long under the open skies that the song of the desert choir comes to them as a lullaby.

It moved Collins, the wolfer, to quiet mirth. Always it affected him that way, this first clamorous outburst of the night. He read in it a note of deep-seated humor, the jeering laughter of the whole coyote tribe mocking the world of men who had sworn to exterminate their kind.

From this oft-repeated prophecy Collins was known to every stockman in three States as the Coyote Prophet, the title a jeering one at first, then bestowed with increasing respect as men saw many of his prophecies fulfilled. The coyote's larger cousin, the wolf, ranged the continent over while the coyote himself was strictly a prairie dweller. For twenty years Collins had predicted that wolves would disappear in settled districts while the coyote would survive; not only survive but increase his range to include the hills and spread over the continent from the Arctic to the Gulf. There were rumors of coyotes turning up in Indiana. Then came the tale that a strange breed of small yellow wolves had appeared in Michigan. Those sheepmen who summered their sheep in the high valleys of the western mountains complained that stray coyotes quit the flats and followed them into the hills to prey upon the flocks. The buffalo wolves that had once infested the range country were gone and it was seldom that any of the big gray killers turned up on the open range except when the pinch of cold and famine drove a few timber wolves down from the north. Men saw these things and wondered if all of Collins' sweeping prophecies would come to pass. In the face of conditions that had placed a value on the coyote's pelt and a bounty on his scalp, there was no apparent decrease in the numbers of the yellow horde from year to year.

Collins listened to the coyote clamor and knew that they had come to stay. The concert was suddenly hushed as a long-drawn wolf howl, faint from distance, drifted far out across the range. Collins turned in his blankets and peered through the window at the black bulk of the mountains to the north of him, towering clear and distinct in the brilliant moonlight.

"If you come down out of those hills I'll stretch your pelt," the wolfer stated. "I'll pinch your toes in a number four."

The wolf whose howl had occasioned this assertion was even then considering the possibilities of which Collins spoke. Men called those of his kind breed-wolves, half coyote and half wolf. He stood on the high divide which was the roughly separating line between the haunts of the two tribes whose blood flowed in his veins,—all wolf except for the yellow fur that marked him for a breed....