The Writings of Thomas Jefferson Library Edition - Vol. 6 (of 20) 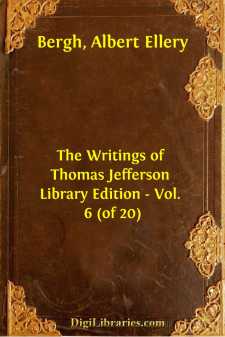 JEFFERSON AS A TACTICIAN

The word "tactician" is usually applied to military movements, but it has a broader meaning than this; it embodies the idea of a peculiar skill or faculty—a nice perception or discernment which is characterized by adroit planning or management, artfully directed in politics or diplomacy in government.

"Of all creatures the sense of tact is most exquisite in man"—Ross: Microcosmia.

"To see in such a clime,

Where science is new, men so exact

True statesmanship is the masterful art. Poetry, music, painting, sculpture and architecture please, thrill and inspire, but the great statesman and diplomatist and leader in thought and action convinces, controls and compels the admiration of all classes and creeds. Logical thought, power of appeal and tactfulness never fail to command attention and respect. It has always been thus, and it will unquestionably so remain. Many really able and brilliant men, however, lack balance and the faculty of calculation. They are too often swayed by emotions, and their intellectual powers, which otherwise might exert a controlling influence, are thus weakened, and often result in failure. True greatness in a man is gauged by what he accomplished in life, and the impress he left upon his fellow-men. It does not consist of one act, or even of many, but rather their effect upon the times in which he lived, and how long they endure after the actor is gone from the throng of the living.

At the bar, in the pulpit, in the medical profession, and especially in political life, tact is the sine qua non to the highest degree of individual success. However gifted one may be, he cannot win conspicuous laurels in any calling or avocation, if he be deficient in tactfulness. The man who best understands human nature, knows how to approach people, and possesses the art of leading them, is the one who will invariably have the largest following and will possess the greatest amount of influence over his fellows. The fact cannot be disputed that men of great brilliancy of intellect, without tact, have been distanced by others far less talented, who possessed the knack of getting near to the masses with the object in view to lead and control them. A military commander who knows how to muster and marshal his men so as to make them most effective when a battle is pending, will be unquestionably successful in manœuvres and successful also in battle; and it is equally true in statecraft, and in the learned professions as well. The skillful tactician is master of every situation and is the victor in every important contest. But more than in any other calling is this true in politics. The successful leader in legislative bodies,—he whose name is recorded on the legislative journal as the author of the most important measures which are enacted into laws—is, without exception, that member who is tactful, thoughtful, industrious and sincere. It makes no difference how great his natural endowments may be, if he be wanting in these elements his success will be restricted to a narrow sphere; and the greatest of these is tactfulness....