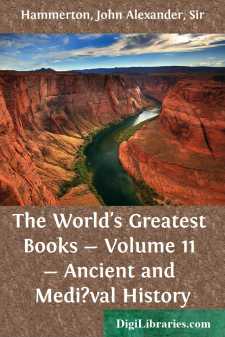 A long, low, level shore, scarcely rising above the sea, a chain of vaguely defined and ever-shifting lakes and marshes, then the triangular plain beyond, whose apex is thrust thirty leagues into the land--this, the Delta of Egypt, has gradually been acquired from the sea, and is, as it were, the gift of the Nile. Where the Delta ends, Egypt proper begins. It is only a strip of vegetable mould stretching north and south between regions of drought and desolation, a prolonged oasis on the banks of the river, made by the Nile, and sustained by the Nile. The whole length of the land is shut in by two ranges of hills, roughly parallel at a mean distance of about twelve miles.

During the earlier ages the river filled all this intermediate space; and the sides of the hills, polished, worn, blackened to their very summits, still bear unmistakable traces of its action. Wasted and shrunken within the deeps of its own ancient bed, the stream now makes a way through its own thick deposits of mud. The bulk of its waters keep to the east, and constitutes the true Nile, the "Great River" of the hieroglyphic inscriptions. At Khartoum the single channel in which the river flowed divides, and two other streams are opened up in a southerly direction, each of them apparently equal in volume to the main stream.

Which is the true Nile? Is it the Blue Nile, which seems to come down from the distant mountains? Or is it the White Nile, which has traversed the immense plains of equatorial Africa? The old Egyptians never knew. The river kept the secret of its source from them as obstinately as it withheld it from us until a few years ago. Vainly did their victorious armies follow the Nile for months together, as they pursued the tribes who dwelt upon its banks, only to find it as wide, as full, as irresistible in its progress as ever. It was a fresh-water sea--iauma, ioma was the name by which they called it. The Egyptians, therefore, never sought its source. It was said to be of supernatural origin, to rise in Paradise, to traverse burning regions inaccessible to man, and afterwards to fall into a sea whence it made its way to Egypt.

The sea mentioned in all the tales is, perhaps, a less extravagant invention than we are at first inclined to think. A lake, nearly as large as the Victoria Nyanza, once covered the marshy plain where the Bahr-el-Abiad unites with the Sobat and with the Bahr-el-Ghazal. Alluvial deposits have filled up all but its deepest depression, which is known as Birket Nu; but in ages preceding our era it must still have been vast enough to suggest to Egyptian soldiers and boatmen the idea of an actual sea opening into the Indian Ocean.

Everything is dependent upon the river--the soil, the produce of the soil, the species of animals it bears, the birds which it feeds--and hence it was the Egyptians placed the river among their gods. They personified it as a man with regular features, and a vigorous but portly body, such as befits the rich of high lineage....