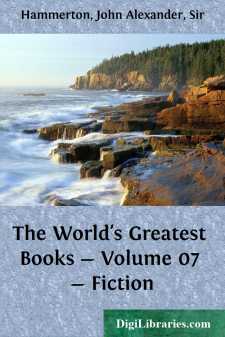 The novels of Thomas Love Peacock still find admirers among cultured readers, but his extravagant satire and a certain bookish awkwardness will never appeal to the great novel-reading public. The son of a London glass merchant, Peacock was born at Weymouth on October 18, 1785. Early in life he was engaged in some mercantile occupation, which, however, he did not follow up for long. Then came a period of study, and he became an excellent classical scholar. His first ambition was to become a poet, and between 1804 and 1806 he published two slender volumes of verse, which attracted little or no attention. Yet Peacock was a poet of considerable merit, his best work in this direction being scattered at random throughout his novels. In 1812 he contracted a friendship with Shelley, whose executor he became with Lord Byron. Peacock's first novel, "Headlong Hall," appeared in 1816, and is interesting not so much as a story pure and simple, but as a study of the author's own temperament. His personalities are seldom real live characters; they are, rather, mouthpieces created for the purposes of discussion. Peacock died on January 23, 1866.

The ambiguous light of a December morning, peeping through the windows of the Holyhead mail, dispelled the soft visions of the four insides, who had slept, or seemed to sleep, through the first seventy miles of the road.

A lively remark that the day was none of the finest having elicited a repartee of "quite the contrary," the various knotty points of meteorology were successively discussed and exhausted; and, the ice being thus broken, in the course of conversation it appeared that all four, though perfect strangers to each other, were actually bound to the same point, namely, Headlong Hall, the seat of the ancient family of the Headlongs, of the vale of Llanberris, in Carnarvonshire.

The present representative of the house, Harry Headlong, Esquire, was, like all other Welsh squires, fond of shooting, hunting, racing, drinking, and other such innocent amusements. But, unlike other Welsh squires, he had actually suffered books to find their way into his house; and, by dint of lounging over them after dinner, he became seized with a violent passion to be thought a philosopher and a man of taste, and had formed in London as extensive an acquaintance with philosophers and dilettanti as his utmost ambition could desire. It now became his chief wish to have them all together in Headlong Hall, arguing over his old Port and Burgundy the various knotty points which puzzled him. He had, therefore, sent them invitations in due form to pass their Christmas at Headlong Hall, and four of the chosen guests were now on their way in the four corners of the Holyhead mail.

These four persons were Mr. Foster, the optimist, who believed in the improvement of mankind; Mr. Escot, the pessimist, who saw mankind constantly deteriorating; Mr. Jenkison, who thought things were very well as they were; and the Reverend Doctor Gaster, who, though neither a philosopher nor a man of taste, had won the squire's fancy by a learned dissertation on the art of stuffing a turkey....