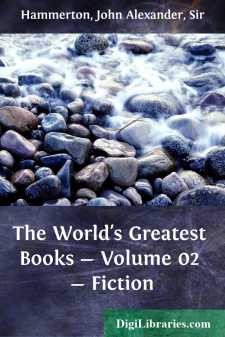 It was, as usual, a brilliant morning, the dewy blades of the rye-grass which covered the plain sparkled brightly in the beams of the sun, which had probably been about two hours above the horizon. Near the mouth of the dingle--Mumpers' Dingle, near Wittenhall, Staffordshire--where my friend Isopel Berners and I, the travelling tinker, were encamped side by side, a rather numerous body of my ancient friends and allies occupied the ground. About five yards on the right, Mr. Petulengro was busily employed in erecting his tent; he held in his hand an iron bar, sharp at the bottom, with a kind of arm projecting from the top for the purpose of supporting a kettle or cauldron over the fire. With the sharp end of this he was making holes in the earth at about twenty inches distance from each other, into which he inserted certain long rods with a considerable bend towards the top, which constituted the timbers of the tent and the supporters of the canvas. Mrs. Petulengro and a female with a crutch in her hand, whom I recognised as Mrs. Chikno, sat near him on the ground.

"I am glad to see you all," said I; "and particularly you, madam," said I, making a bow to Mrs. Petulengro, "and you also, madam," taking off my hat to Mrs. Chikno.

"Good-day to you, sir," said Mrs. Petulengro. "You look as usual, charmingly, and speak so, too; you have not forgot your manners."

"It is not all gold that glitters," said Mrs. Chikno. "However, good-morrow to you, young rye."

"I am come on an errand," said I. "Isopel Berners, down in the dell there, requests the pleasure of Mr. and Mrs. Petulengro's company at breakfast. She will be happy also to see you, madam," said I, addressing Mrs. Chikno.

"Then I will not visit with her," said Mrs. Chikno. "I countenance nothing in the roving line."

"What do you mean by the roving line?" I demanded.

"What do I mean by the roving line? Why, by it I mean such conduct as is not tatcheno. When ryes and rawnies lives together in dingles, without being certificated, I call such behaviour being tolerably deep in the roving line, everything savouring of which I am determined not to sanctify. I have suffered too much by my own certificated husband's outbreaks in that line to afford anything of the kind the slightest shadow of countenance."

"It is hard that people may not live in dingles together without being suspected of doing wrong," said I.

"So it is," said Mrs. Petulengro, interposing. "I am suspicious of nobody, not even of my own husband, whom some people would think I have a right to be suspicious of, seeing that on his account I once refused a lord. I always allows him an agreeable latitude to go where he pleases. But I have had the advantage of keeping good company, and therefore----"