The World's Great Men of Music Story-Lives of Master Musicians 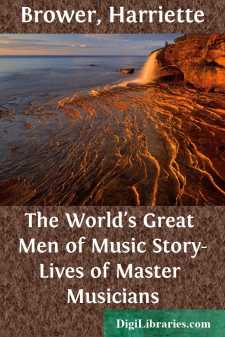 To learn something of the life and labors of Palestrina, one of the earliest as well as one of the greatest musicians, we must go back in the world's history nearly four hundred years. And even then we may not be able to discover all the events of his life as some of the records have been lost. But we have the main facts, and know that Palestrina's name will be revered for all time as the man who strove to make sacred music the expression of lofty and spiritual meaning.

Upon a hoary spur of the Apennines stands the crumbling town of Palestrina. It is very old now; it was old when Rome was young. Four hundred years ago Palestrina was dominated by the great castle of its lords, the proud Colonnas. Naturally the town was much more important in those days than it is to-day.

At that time there lived in Palestrina a peasant pair, Sante Pierluigi and his wife Maria, who seem to have been an honest couple, and not grindingly poor, since the will of Sante's mother has lately been found, in which she bequeathed a house in Palestrina to her two sons. Besides this she left behind a fine store of bed linen, mattresses and cooking utensils. Maria Gismondi also had a little property.

To this pair was born, probably in 1526, a boy whom they named Giovanni Pierluigi, which means John Peter Louis. This boy, from a tiniest child, loved beauty of sight and sound. And this is not at all surprising, for a child surrounded from infancy by the natural loveliness and glory of old Palestrina, would unconsciously breathe in a sense of beauty and grandeur.

It was soon discovered the boy had a voice, and his mother is said to have sold some land she owned to provide for her son's musical training.

From the rocky heights on which their town was built, the people of Palestrina could look across the Campagna—the great plain between—and see the walls and towers of Rome. At the time of our story, Saint Peter's had withstood the sack of the city, which happened a dozen years before, and Bramante's vast basilica had already begun to rise. The artistic life of Rome was still at high tide, for Raphael had passed away but twenty years before, and Michael Angelo was at work on his Last Judgment.

Though painting and sculpture flourished, music did not keep pace with advance in other arts. The leading musicians were Belgian, Spanish or French, and their music did not match the great achievements attained in the kindred art of the time—architecture, sculpture and painting. There was needed a new impetus, a vital force. Its rise began when the peasant youth John Peter Louis descended from the heights of Palestrina to the banks of the Tiber.

It is said that Tomasso Crinello was the boy's master; whether this is true or not, he was surely trained in the Netherland manner of composition.

The youth, whom we shall now call Palestrina, as he is known by the name of his birthplace, returned from Rome at the age of eighteen to his native town, in 1544, as a practising musician, and took a post at the Cathedral of Saint Agapitus....