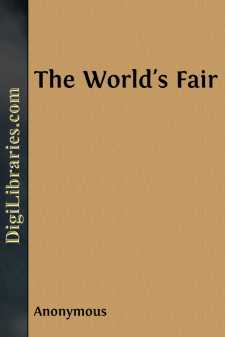 THE WORLD'S FAIR; OR, CHILDREN'S PRIZE GIFT BOOK OF THE GREAT EXHIBITION.

What a pretty picture we have in the first title page, of the Great Exhibition in Hyde Park! This gigantic structure is built of iron, glass, and wood; but as, at a distance, it seems to be made entirely of glass, it is called the "Crystal Palace." Does it not look like one of those magnificent palaces we read about in fairy tales?

The Great Exhibition is intended to receive and exhibit the most beautiful and most ingenious things from every country in the world, in order that everybody may become better known to each other than they have been, and be joined together in love and trade, like one great family; so that we may have no more wicked, terrible battles, such as there used to be long ago, when nobody cared who else was miserable, so that they themselves were comfortable. Only look at the thousands of people who crowd the Park,—all so different looking, and so curiously dressed. Grave Turks,—swarthy Spaniards and Italians,—East Indian Princes, glistening with gold and jewels,—clever French and German workmen, in blue cotton blouses,—Chinese gentlemen,—Tartars, Russians, energetic Americans, and many more. I wonder what they all think of us, whose habits in many things are so different from their own?

And what charming things there are in the Exhibition itself! Fine porcelain wares, mirrors, books, statues, perfumes, and many more articles from various parts of the world,—beautiful fans, books, bronzes, and an infinity of other matters, from France in particular. Here is a model in miniature of the Crystal Palace itself, in glass.

Ah! talking of glass, what think you of an enormous French decanter, in which three persons, having gotten inside by a ladder, can sit and dine off a table a yard in circumference? This is quite an exhibition in itself, I think. In another part of the building, we have a looking-glass, from Germany, which is the largest that ever was made, and is encased in a splendid frame of Dresden china. But here is a darling little English steam-engine, so small that you could, after wrapping it up in paper, lay it very comfortably inside an ordinary-sized walnut-shell, while the plate on which it stands is not bigger than a sixpence!

In the very centre of the building, a gigantic crystal fountain diffuses a delicious coolness around, its bright clear waters sparkling, leaping, and playing, as if in delight and astonishment at the splendid and wonderful articles surrounding it. And there are two immense statues just beside it, looking mightily pleased with the agreeable coolness of the water. But here are two large bronze lions;—how terrible they look: they seem almost as if they were going to jump at us. There are animals of various kinds in different parts of the Exhibition; stags, horses, foxes, birds, cats, and even a ferocious-looking tiger.

There is a bundle of nails so diminutive you can hardly see them—another bundle of three thousand nails, one thousand gold, another silver, and the third iron; so light that the whole weighs only three grains,—a French watch, smaller than a fourpenny piece,—Hindoo stuffs, so thin you can scarcely feel them, yet are made from rejected cotton-husks,—a highly-finished model of a palace, from Italy; and a handsome carriage, from Prussia....