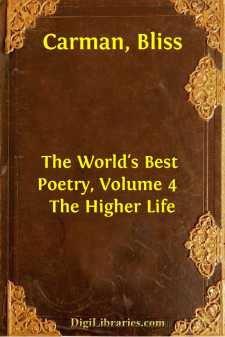 Add to My Favorites
Published: 8 years ago
Downloads: 57
Rating: (0 Votes)

RELIGION AND POETRY BY WASHINGTON GLADDEN.

The time is not long past when the copulative in that title might have suggested to some minds an antithesis,—as acid and alkali, or heat and cold. That religion could have affiliation with anything so worldly as poetry would have seemed to some pious people a questionable proposition. There were the Psalms, in the Old Testament, to be sure; and the minister had been heard to allude to them as poetry: might not that indicate some heretical taint in him, caught, perchance, from the "German neologists" whose influence we were beginning to dread? It did not seem quite orthodox to describe the Psalms as poems; and when, a little later, some one ventured to speak of the Book of Job as a dramatic poem, there were many who were simply horrified. Indeed, it was difficult for many good people to consider the Biblical writings as in any sense literature; they belonged in a category by themselves, and the application to them of the terms by which we describe similar writings in other books appeared to many good men and women a kind of profanation. This was not, of course, the attitude of educated men and women, but something akin to it affected large numbers of excellent people.

We are well past that period, and the relations of religion and poetry may now be discussed with no fear of misunderstandings. These relations are close and vital. Poetry is indebted to religion for its largest and loftiest inspirations, and religion is indebted to poetry for its subtlest and most luminous interpretations.

Religion is related to poetry as life is related to art. Religion is life, the life of God in the soul of man—the response of man's spirit to the attractions of the divine Spirit. Poetry is an interpretation of life. Religious poetry endeavors to express, in beautiful forms, the facts of the religious life. There is poetry that is not religious; poetry which deals only with that which is purely sensuous, poetry which does not hint at spiritual facts, or divine relations; and there is religion which has but little to do with poetry: but the highest religious thoughts and feelings are greatly served by putting them into poetic forms; and the greatest poetry is always that which sets forth the facts of the religious life. "Without love to man and love to God," says Dr. Strong, "the greatest poetry is impossible. Mere human love to God is not enough to stir the deepest chords either in the poet or in his readers. It is the connection of human love with the divine love that gives it permanence and security."[A]

If, then, religion is the supreme experience of the human spirit, and that experience finds its most perfect literary expression in poetry, the present volume ought to contain a precious collection of the best literature. And any one who wished to give to a friend a volume which would convey to him the essential elements of religion would probably be safe to choose this volume rather than any prose treatise upon theology ever printed. He who reads this book through will get a clearer and truer idea of what the religious life is than any philosophical discussion could give him....