The World War and What was Behind It Or, the Story of the Map of Europe 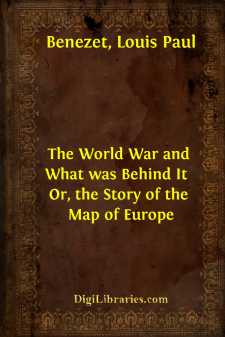 Chapter I The Great War

Among the bricklayers at work on a building which was being erected in a great American city during the summer of 1914 were two men who had not yet become citizens of the United States. Born abroad, they still owed allegiance, one to the Emperor of Austria, the other to the Czar of Russia.

Meeting in a new country, and using a new language which gave them a chance to understand each other, they had become well acquainted. They were members of the same labor union, and had worked side by side on several different jobs. In the course of time, a firm friendship had sprung up between them. Suddenly, on the same day, each was notified to call at the office of the agent of his government in the city. Next morning the Russian came to his boss to explain that he must quit work, that he had been called home to fight for the "Little Father" of the Russians. He found his chum, the Austrian, there ahead of him, telling that he had to go, for the Russians had declared war on Austria and the good Kaiser, Franz Josef, had need of all his young men.

1In the German language, the title Kaiser means Emperor.

The two chums stared at each other in sorrow and dismay. The pitiless arm of the god of war had reached across the broad Atlantic, plucking them back from peace and security. With weapons put into their hands they would be ordered to kill each other on sight.

A last hand-clasp, a sorrowful "Good luck to you," and they parted.

Why was this necessary? What was this irresistible force, strong enough to separate the two friends and drag them back five thousand miles for the purpose of killing each other? To answer these two questions is the purpose of this little volume.

Beginning with the summer of 1914, Europe and parts of Asia and Africa were torn and racked with the most tremendous war that the world has ever seen. Millions of men were killed. Other millions were maimed, blinded, or disfigured for life. Still other millions were herded into prison camps or forced to work like convict laborers. Millions of homes were filled with grief. Millions of women were forced to do hard work which before the war had been considered beyond their power. Millions of children were left fatherless. What had been the richest and most productive farming land in Europe was made a barren waste. Thousands of villages and towns were utterly destroyed and their inhabitants were forced to flee, the aged, the sick, and the infants alike.

In many cases, as victorious armies swept through Poland and Serbia, the wretched inhabitants fled before them, literally starving, because all food had been seized for the use of fighting men. Dreadful diseases, which cannot exist where people have the chance to bathe and keep themselves clean, once more appeared, sweeping away hundreds of thousands of victims....