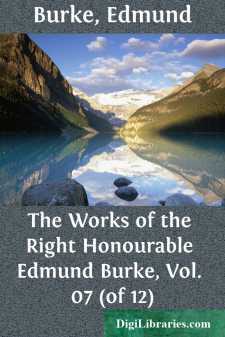 The following Speech was occasioned by a petition to the House of Commons from certain clergymen of the Church of England, and certain of the two professions of Civil Law and Physic, and others, praying to be relieved from subscription to the Thirty-Nine Articles, as required by the Acts of Uniformity. The persona associated for this purpose were distinguished at the time by the name of "The Feathers Tavern Association," from the place where their meetings were usually held. Their petition was presented on the 6th of February, 1772; and on a motion that it should be brought up, the same was negatived on a division, in which Mr. Burke voted in the majority, by 217 against 71.

Mr. Speaker,—I should not trouble the House upon this question, if I could at all acquiesce in many of the arguments, or justify the vote I shall give upon several of the reasons which have been urged in favor of it. I should, indeed, be very much concerned, if I were thought to be influenced to that vote by those arguments.

In particular, I do most exceedingly condemn all such arguments as involve any kind of reflection on the personal character of the gentlemen who have brought in a petition so decent in the style of it, and so constitutional in the mode. Besides the unimpeachable integrity and piety of many of the promoters of this petition, which render those aspersions as idle as they are unjust, such a way of treating the subject can have no other effect than to turn the attention of the House from the merits of the petition, the only thing properly before us, and which we are sufficiently competent to decide upon, to the motives of the petitioners, which belong exclusively to the Great Searcher of Hearts.

We all know that those who loll at their ease in high dignities, whether of the Church or of the State, are commonly averse to all reformation. It is hard to persuade them that there can be anything amiss in establishments which by feeling experience they find to be so very comfortable. It is as true, that, from the same selfish motives, those who are struggling upwards are apt to find everything wrong and out of order. These are truths upon one side and on the other; and neither on the one side or the other in argument are they worth a single farthing. I wish, therefore, so much had not been said upon these ill-chosen, and worse than ill-chosen, these very invidious topics.

I wish still more that the dissensions and animosities which had slept for a century had not been just now most unseasonably revived. But if we must be driven, whether we will or not, to recollect these unhappy transactions, let our memory be complete and equitable, let us recollect the whole of them together. If the Dissenters, as an honorable gentleman has described them, have formerly risen from a "whining, canting, snivelling generation," to be a body dreadful and ruinous to all our establishments, let him call to mind the follies, the violences, the outrages, and persecutions, that conjured up, very blamably, but very naturally, that same spirit of retaliation....