The Works of Samuel Johnson, LL.D. in Nine Volumes Volume the Eighth: The Lives of the Poets, Volume II 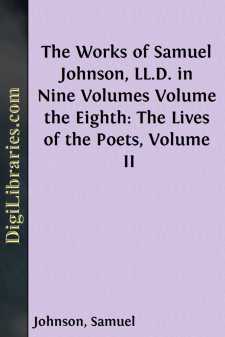 Matthew Prior is one of those that have burst out from an obscure original to great eminence. He was born July 21, 1664, according to some, at Winburn, in Dorsetshire, of I know not what parents; others say, that he was the son of a joiner of London: he was, perhaps, willing enough to leave his birth unsettled, in hope, like Don Quixote, that the historian of his actions might find him some illustrious alliance.

He is supposed to have fallen, by his father’s death, into the hands of his uncle, a vintner, near Charing-cross, who sent him for some time to Dr. Busby, at Westminster; but, not intending to give him any education beyond that of the school, took him, when he was well advanced in literature, to his own house, where the earl of Dorset, celebrated for patronage of genius, found him by chance, as Burnet relates, reading Horace, and was so well pleased with his proficiency, that he undertook the care and cost of his academical education.

He entered his name in St. John’s college, at Cambridge, in 1682, in his eighteenth year; and it may be reasonably supposed that he was distinguished among his contemporaries. He became a bachelor, as is usual, in four years; and two years afterwards wrote the poem on the Deity, which stands first in his volume.

It is the established practice of that college, to send every year to the earl of Exeter some poems upon sacred subjects, in acknowledgment of a benefaction enjoyed by them from the bounty of his ancestor. On this occasion were those verses written, which, though nothing is said of their success, seem to have recommended him to some notice; for his praise of the countess’s musick, and his lines on the famous picture of Seneca, afford reason for imagining that he was more or less conversant with that family.

The same year, 1688, he published the City Mouse and Country Mouse, to ridicule Dryden’s Hind and Panther, in conjunction with Mr. Montague. There is a story of great pain suffered, and of tears shed, on this occasion, by Dryden, who thought it hard that “an old man should be so treated by those to whom he had always been civil.” By tales like these is the envy, raised by superiour abilities, every day gratified: when they are attacked, every one hopes to see them humbled; what is hoped is readily believed; and what is believed is confidently told. Dryden had been more accustomed to hostilities, than that such enemies should break his quiet; and if we can suppose him vexed, it would be hard to deny him sense enough to conceal his uneasiness.

The City Mouse and Country Mouse procured its authors more solid advantages than the pleasure of fretting Dryden; for they were both speedily preferred. Montague, indeed, obtained the first notice, with some degree of discontent, as it seems, in Prior, who, probably, knew that his own part of the performance was the best. He had not, however, much reason to complain; for he came to London, and obtained such notice, that, in 1691, he was sent to the congress at the Hague as secretary to the embassy....