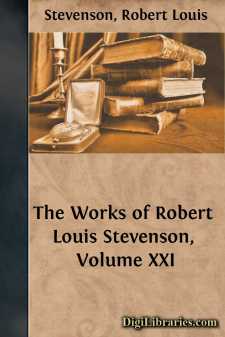 CHAPTER I INTRODUCES THE ADMIRAL

When Dick Naseby was in Paris he made some odd acquaintances, for he was one of those who have ears to hear, and can use their eyes no less than their intelligence. He made as many thoughts as Stuart Mill; but his philosophy concerned flesh and blood, and was experimental as to its method. He was a type-hunter among mankind. He despised small game and insignificant personalities, whether in the shape of dukes or bagmen, letting them go by like sea-weed; but show him a refined or powerful face, let him hear a plangent or a penetrating voice, fish for him with a living look in some one’s eye, a passionate gesture, a meaning or ambiguous smile, and his mind was instantaneously awakened. “There was a man, there was a woman,“ he seemed to say, and he stood up to the task of comprehension with the delight of an artist in his art.

And indeed, rightly considered, this interest of his was an artistic interest. There is no science in the personal study of human nature. All comprehension is creation; the woman I love is somewhat of my handiwork; and the great lover, like the great painter, is he that can so embellish his subject as to make her more than human, whilst yet by a cunning art he has so based his apotheosis on the nature of the case that the woman can go on being a true woman, and give her character free play, and show littleness, or cherish spite, or be greedy of common pleasures, and he continue to worship without a thought of incongruity. To love a character is only the heroic way of understanding it. When we love, by some noble method of our own or some nobility of mien or nature in the other, we apprehend the loved one by what is noblest in ourselves. When we are merely studying an eccentricity, the method of our study is but a series of allowances. To begin to understand is to begin to sympathise; for comprehension comes only when we have stated another’s faults and virtues in terms of our own. Hence the proverbial toleration of artists for their own evil creations. Hence, too, it came about that Dick Naseby, a high-minded creature, and as scrupulous and brave a gentleman as you would want to meet, held in a sort of affection the various human creeping things whom he had met and studied.

One of these was Mr. Peter Van Tromp, an English-speaking, two-legged animal of the international genus, and by profession of general and more than equivocal utility. Years before he had been a painter of some standing in a colony, and portraits signed “Van Tromp” had celebrated the greatness of colonial governors and judges. In those days he had been married, and driven his wife and infant daughter in a pony trap. What were the steps of his declension? No one exactly knew. Here he was at least, and had been, any time these past ten years, a sort of dismal parasite upon the foreigner in Paris.

It would be hazardous to specify his exact industry. Coarsely followed, it would have merited a name grown somewhat unfamiliar to our ears....