The Works of Robert Louis Stevenson - Swanston Edition Vol. XIX (of 25) The Ebb-Tide; Weir of Hermiston 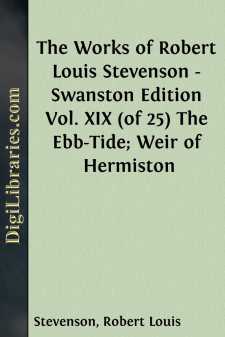 CHAPTER I NIGHT ON THE BEACH

Throughout the island world of the Pacific, scattered men of many European races, and from almost every grade of society, carry activity and disseminate disease. Some prosper, some vegetate. Some have mounted the steps of thrones and owned islands and navies. Others again must marry for a livelihood; a strapping, merry, chocolate-coloured dame supports them in sheer idleness; and, dressed like natives, but still retaining some foreign element of gait or attitude, still perhaps with some relic (such as a single eye-glass) of the officer and gentleman, they sprawl in palm-leaf verandahs and entertain an island audience with memoirs of the music-hall. And there are still others, less pliable, less capable, less fortunate, perhaps less base, who continue, even in these isles of plenty, to lack bread.

At the far end of the town of Papeete, three such men were seated on the beach under a purao-tree.

It was late. Long ago the band had broken up and marched musically home, a motley troop of men and women, merchant clerks and navy officers, dancing in its wake, arms about waist and crowned with garlands. Long ago darkness and silence had gone from house to house about the tiny pagan city. Only the street-lamps shone on, making a glow-worm halo in the umbrageous alleys, or drawing a tremulous image on the waters of the port. A sound of snoring ran among the piles of lumber by the Government pier. It was wafted ashore from the graceful clipper-bottomed schooners, where they lay moored close in like dinghies, and their crews were stretched upon the deck under the open sky or huddled in a rude tent amidst the disorder of merchandise.

But the men under the purao had no thought of sleep. The same temperature in England would have passed without remark in summer; but it was bitter cold for the South Seas. Inanimate nature knew it, and the bottle of cocoa-nut oil stood frozen in every bird-cage house about the island; and the men knew it, and shivered. They wore flimsy cotton clothes, the same they had sweated in by day and run the gauntlet of the tropic showers; and to complete their evil case, they had no breakfast to mention, less dinner, and no supper at all.

In the telling South Sea phrase, these three men were on the beach. Common calamity had brought them acquainted, as the three most miserable English-speaking creatures in Tahiti; and beyond their misery, they knew next to nothing of each other, not even their true names. For each had made a long apprenticeship in going downward; and each, at some stage of the descent, had been shamed into the adoption of an alias. And yet not one of them had figured in a court of justice; two were men of kindly virtues; and one, as he sat and shivered under the purao, had a tattered Virgil in his pocket.

Certainly, if money could have been raised upon the book, Robert Herrick would long ago have sacrificed that last possession; but the demand for literature, which is so marked a feature in some parts of the South Seas, extends not so far as the dead tongues; and the Virgil, which he could not exchange against a meal, had often consoled him in his hunger....