The Works of Robert Louis Stevenson - Swanston Edition Vol. 3 (of 25) 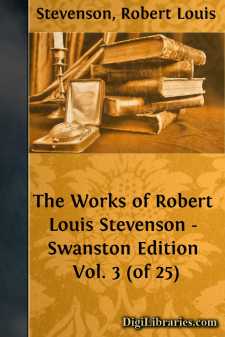 These studies are collected from the monthly press. One appeared in the New Quarterly, one in Macmillan’s, and the rest in the Cornhill Magazine. To the Cornhill I owe a double debt of thanks; first, that I was received there in the very best society, and under the eye of the very best of editors; and second, that the proprietors have allowed me to republish so considerable an amount of copy.

These nine worthies have been brought together from many different ages and countries. Not the most erudite of men could be perfectly prepared to deal with so many and such various sides of human life and manners. To pass a true judgment upon Knox and Burns implies a grasp upon the very deepest strain of thought in Scotland,—a country far more essentially different from England than many parts of America; for, in a sense, the first of these men re-created Scotland, and the second is its most essentially national production. To treat fitly of Hugo and Villon would involve yet wider knowledge, not only of a country foreign to the author by race, history, and religion, but of the growth and liberties of art. Of the two Americans, Whitman and Thoreau, each is the type of something not so much realised as widely sought after among the late generations of their countrymen; and to see them clearly in a nice relation to the society that brought them forth, an author would require a large habit of life among modern Americans. As for Yoshida, I have already disclaimed responsibility; it was but my hand that held the pen.

In truth, these are but the readings of a literary vagrant. One book led to another, one study to another. The first was published with trepidation. Since no bones were broken, the second was launched with greater confidence. So, by insensible degrees, a young man of our generation acquires, in his own eyes, a kind of roving judicial commission through the ages: and, having once escaped the perils of the Freemans and the Furnivalls, sets himself up to right the wrongs of universal history and criticism. Now it is one thing to write with enjoyment on a subject while the story is hot in your mind from recent reading, coloured with recent prejudice; and it is quite another business to put these writings coldly forth again in a bound volume. We are most of us attached to our opinions; that is one of the “natural affections” of which we hear so much in youth; but few of us are altogether free from paralysing doubts and scruples. For my part, I have a small idea of the degree of accuracy possible to man, and I feel sure these studies teem with error. One and all were written with genuine interest in the subject; many, however, have been conceived and finished with imperfect knowledge; and all have lain, from beginning to end, under the disadvantages inherent in this style of writing.

Of these disadvantages a word must here be said. The writer of short studies, having to condense in a few pages the events of a whole lifetime, and the effect on his own mind of many various volumes, is bound, above all things, to make that condensation logical and striking. For the only justification of his writing at all is that he shall present a brief, reasoned, and memorable view. By the necessity of the case, all the more neutral circumstances are omitted from his narrative; and that of itself, by the negative exaggeration of which I have spoken in the text, lends to the matter in hand a certain false and specious glitter....