The Works of Robert Louis Stevenson - Swanston Edition Vol. 23 (of 25) 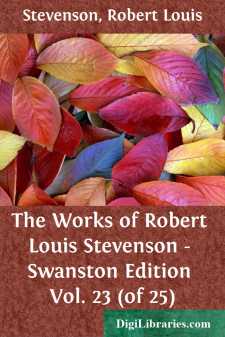 The circumstances which have made me responsible for selecting and editing the correspondence of Robert Louis Stevenson are the following. He was for many years my closest friend. We first met in 1873, when he was in his twenty-third year and I in my twenty-ninth, at the place and in the manner mentioned at page 54 of this volume. It was my good fortune then to be of use to him, partly by such technical hints as even the most brilliant beginner may take from an older hand, partly by recommending him to editors—first, if I remember right, to Mr. Hamerton and Mr. Richmond Seeley, of the Portfolio, then in succession to Mr. George Grove (Macmillan’s Magazine), Mr. Leslie Stephen (Cornhill), and Dr. Appleton (the Academy); and somewhat, lastly, by helping to raise him in the estimation of parents who loved but for the moment failed to understand him. It belonged to the richness of his nature to repay in all things much for little, á¼‘κατÏŒμβοá½¶ á¼ννεαβοιá¿¶ν, and from these early relations sprang the affection and confidence, to me inestimable, of which the following correspondence bears evidence.

One day in the autumn of 1888, in the island of Tahiti, during an illness which he supposed might be his last, Stevenson put into the hands of his stepson, Mr. Lloyd Osbourne, a sealed paper with a request that it might be opened after his death. He recovered, and had strength enough to enjoy six years more of active life and work in the Pacific Islands. When the end came, the paper was opened and found to contain, among other things, the expression of his wish that I should prepare for publication “a selection of his letters and a sketch of his life.” I had already, in 1892, when he was anxious—needlessly, as it turned out—as to the provision he might be able to leave for his family, received from him a suggestion that “some kind of a book” might be made out of the monthly journal-letters which he had been in the habit of writing me from Samoa: letters begun at first with no thought of publication and simply in order to maintain our intimacy, so far as might be, undiminished by separation. This part of his wishes I was able to carry out promptly, and the result appeared under the title Vailima Letters in the autumn following his death (1895). Lack of leisure delayed the execution of the remaining part. For one thing, the body of correspondence which came in from various quarters turned out much larger than had been anticipated. He did not love writing letters, and will be found somewhere in the following pages referring to himself as one “essentially and originally incapable of the art epistolary.” That he was a bad correspondent had come to be an accepted view among his friends; but in truth it was only during one period of his life that he at all deserved such a reproach. At other times, as became apparent after his death, he had shown a degree of industry and spirit in letter-writing extraordinary considering his health and his occupations....