The Works of Robert Louis Stevenson - Swanston Edition Vol. 20 (of 25) 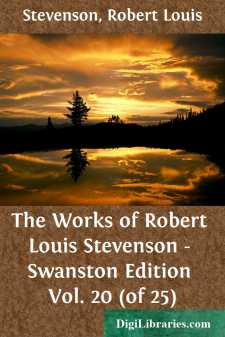 A TALE OF A LION RAMPANT

It was in the month of May 1813 that I was so unlucky as to fall at last into the hands of the enemy. My knowledge of the English language had marked me out for a certain employment. Though I cannot conceive a soldier refusing to incur the risk, yet to be hanged for a spy is a disgusting business; and I was relieved to be held a prisoner of war. Into the Castle of Edinburgh, standing in the midst of that city on the summit of an extraordinary rock, I was cast with several hundred fellow-sufferers, all privates like myself, and the more part of them, by an accident, very ignorant, plain fellows. My English, which had brought me into that scrape, now helped me very materially to bear it. I had a thousand advantages. I was often called to play the part of an interpreter, whether of orders or complaints, and thus brought in relations, sometimes of mirth, sometimes almost of friendship, with the officers in charge. A young lieutenant singled me out to be his adversary at chess, a game in which I was extremely proficient, and would reward me for my gambits with excellent cigars. The major of the battalion took lessons of French from me while at breakfast, and was sometimes so obliging as to have me join him at the meal. Chevenix was his name. He was stiff as a drum-major and selfish as an Englishman, but a fairly conscientious pupil and a fairly upright man. Little did I suppose that his ramrod body and frozen face would, in the end, step in between me and all my dearest wishes; that upon this precise, regular, icy soldier-man my fortunes should so nearly shipwreck! I never liked, but yet I trusted him; and though it may seem but a trifle, I found his snuff-box with the bean in it come very welcome.

For it is strange how grown men and seasoned soldiers can go back in life; so that after but a little while in prison, which is after all the next thing to being in the nursery, they grow absorbed in the most pitiful, childish interests, and a sugar-biscuit or a pinch of snuff become things to follow after and scheme for!

We made but a poor show of prisoners. The officers had been all offered their parole, and had taken it. They lived mostly in suburbs of the city, lodging with modest families, and enjoyed their freedom and supported the almost continual evil tidings of the Emperor as best they might. It chanced I was the only gentleman among the privates who remained. A great part were ignorant Italians, of a regiment that had suffered heavily in Catalonia. The rest were mere diggers of the soil, treaders of grapes, or hewers of wood, who had been suddenly and violently preferred to the glorious state of soldiers. We had but the one interest in common: each of us who had any skill with his fingers passed the hours of his captivity in the making of little toys and articles of Paris; and the prison was daily visited at certain hours by a concourse of people of the country, come to exult over our distress, or—it is more tolerant to suppose—their own vicarious triumph....