The Works of Robert Louis Stevenson - Swanston Edition Vol. 13 (of 25) 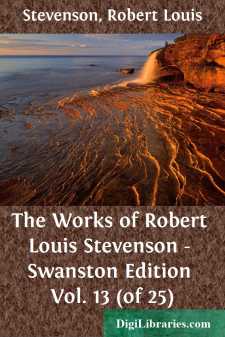 It was about three o’clock of a winter’s afternoon in Tai-o-hae, the French capital and port of entry of the Marquesas Islands. The Trades blew strong and squally; the surf roared loud on the shingle beach; and the fifty-ton schooner of war, that carries the flag and influence of France about the islands of the cannibal group, rolled at her moorings under Prison Hill. The clouds hung low and black on the surrounding amphitheatre of mountains; rain had fallen earlier in the day, real tropic rain, a waterspout for violence; and the green and gloomy brow of the mountain was still seamed with many silver threads of torrent.

In these hot and healthy islands winter is but a name. The rain had not refreshed, nor could the wind invigorate, the dwellers of Tai-o-hae: away at one end, indeed, the commandant was directing some changes in the residency garden beyond Prison Hill; and the gardeners, being all convicts, had no choice but to continue to obey. All other folks slumbered and took their rest: Vaekehu, the native Queen, in her trim house under the rustling palms; the Tahitian commissary, in his beflagged official residence; the merchants, in their deserted stores; and even the club-servant in the club, his head fallen forward on the bottle-counter, under the map of the world and the cards of navy officers. In the whole length of the single shoreside street, with its scattered board houses looking to the sea, its grateful shade of palms and green jungle of puraos, no moving figure could be seen. Only, at the end of the rickety pier, that once (in the prosperous days of the American rebellion) was used to groan under the cotton of John Hart, there might have been spied upon a pile of lumber the famous tattooed white man, the living curiosity of Tai-o-hae.

His eyes were open, staring down the bay. He saw the mountains droop, as they approached the entrance, and break down in cliffs: the surf boil white round the two sentinel islets; and between, on the narrow bight of blue horizon, Ua-pu upraise the ghost of her pinnacled mountain-tops. But his mind would take no account of these familiar features; as he dodged in and out along the frontier line of sleep and waking, memory would serve him with broken fragments of the past: brown faces and white, of skipper and shipmate, king and chief, would arise before his mind and vanish; he would recall old voyages, old landfalls in the hour of dawn; he would hear again the drums beat for a man-eating festival; perhaps he would summon up the form of that island princess for the love of whom he had submitted his body to the cruel hands of the tattooer, and now sat on the lumber, at the pier-end of Tai-o-hae, so strange a figure of a European. Or perhaps, from yet further back, sounds and scents of England and his childhood might assail him: the merry clamour of cathedral bells, the broom upon the foreland, the song of the river on the weir.

It is bold water at the mouth of the bay; you can steer a ship about either sentinel, close enough to toss a biscuit on the rocks....