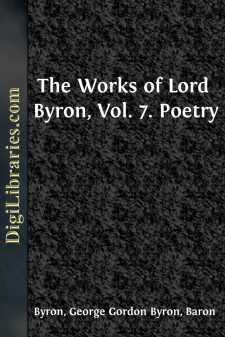 Of the seventy-three "Epigrams and Jeux d'Esprit," which are printed at the commencement of this volume, forty-five were included in Murray's one-volume edition of 1837, eighteen have been collected from various publications, and ten are printed and published for the first time.

The "Devil's Drive," which appears in Moore's Letters and Journals, and in the sixth volume of the Collected Edition of 1831 as an "Unfinished Fragment" of ninety-seven lines, is now printed and published for the first time in its entirety (248 lines), from a MS. in the possession of the Earl of Ilchester. "A Farewell Petition to J. C. H. Esq.;" "My Boy Hobbie O;" "[Love and Death];" and "Last Words on Greece," are reprinted from the first volume of Murray's Magazine (1887).

A few imperfect and worthless poems remain in MS.; but with these and one or two other unimportant exceptions, the present edition of the Poetical Works may be regarded as complete.

In compiling a "Bibliography of the successive Editions and Translations of Lord Byron's Poetical Works," I have endeavoured, in the first instance, to give a full and particular account of the collected editions and separate issues of the poems and dramas which were open to my inspection; and, secondly, to extract from general bibliographies, catalogues of public and private libraries, and other sources bibliographical records of editions which I have been unable to examine, and were known to me only at second-hand. It will be observed that the title-pages of editions which have passed through my hands are aligned; the titles of all other editions are italicized.

I cannot pretend that this assortment of bibliographical entries is even approximately exhaustive; but as "a sample" of a bibliography it will, I trust, with all its imperfections, be of service to the student of literature, if not to the amateur or bibliophile. With regard to nomenclature and other technicalities, my aim has been to put the necessary information as clearly and as concisely as possible, rather than to comply with the requirements of this or that formula. But the path of the bibliographer is beset with difficulties. "Al Sirat's arch"—"the bridge of breadth narrower than the thread of a famished spider, and sharper than the edge of a sword" (see The Giaour, line 483, note 1)— affords an easier and a safer foothold.

To the general reader a bibliography says little or nothing; but, in one respect, a bibliography of Byron is of popular import. It affords scientific proof of an almost unexampled fame, of a far-reaching and still potent influence. Teuton and Latin and Slav have taken Byron to themselves, and have made him their own. No other English poet except Shakespeare has been so widely read and so frequently translated. Of Manfred I reckon one Bohemian translation, two Danish, two Dutch, three French, nine German, three Hungarian, three Italian, two Polish, one Romaic, one Roumanian, four Russian, and three Spanish translations, and, in all probability, there are others which have escaped my net. The question, the inevitable question, arises—What was, what is, the secret of Byron's Continental vogue? and why has his fame gone out into all lands? Why did Goethe enshrine him, in the second part of Faust, "as the representative of the modern era ......