The Works of Lord Byron. Vol. 6 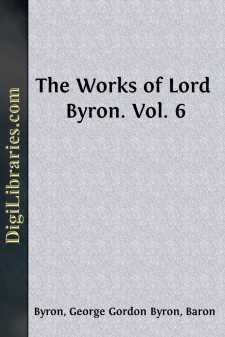 Byron was a rapid as well as a voluminous writer. His Tales were thrown off at lightning speed, and even his dramas were thought out and worked through with unhesitating energy and rapid achievement. Nevertheless, the composition of his two great poems was all but coextensive with his poetical life. He began the first canto of Childe Harold in the autumn of 1809, and he did not complete the fourth canto till the spring of 1818. He began the first canto of Don Juan in the autumn of 1818, and he was still at work on a seventeenth canto in the spring of 1823. Both poems were issued in parts, and with long intervals of unequal duration between the parts; but the same result was brought about by different causes and produced a dissimilar effect. Childe Harold consists of three distinct poems descriptive of three successive travels or journeys in foreign lands. The adventures of the hero are but the pretext for the shifting of the diorama; whereas in Don Juan the story is continuous, and the scenery is exhibited as a background for the dramatic evolution of the personality of the hero. Childe Harold came out at intervals, because there were periods when the author was stationary; but the interruptions in the composition and publication of Don Juan were due to the disapproval and discouragement of friends, and the very natural hesitation and procrastination of the publisher. Canto I. was written in September, 1818; Canto II. in December-January, 1818-1819. Both cantos were published on July 15, 1819. Cantos III., IV. were written in the winter of 1819-1820; Canto V., after an interval of nine months, in October-November, 1820, but the publication of Cantos III., IV., V. was delayed till August 8, 1821. The next interval was longer still, but it was the last. In June, 1822, Byron began to work at a sixth, and by the end of March, 1823, he had completed a sixteenth canto. But the publication of these later cantos, which had been declined by Murray, and were finally entrusted to John Hunt, was spread over a period of several months. Cantos VI., VII., VIII., with a Preface, were published July 15; Cantos IX., X., XI, August 29; Cantos XII., XIII., XIV., December 17, 1823; and, finally, Cantos XV., XVI., March 26, 1824. The composition of Don Juan, considered as a whole, synchronized with the composition of all the dramas (except Manfred) and the following poems: The Prophecy of Dante, (the translation of) The Morgante Maggiore, The Vision of Judgment, The Age of Bronze, and The Island.

There is little to be said with regard to the "Sources" of Don Juan. Frere's Whistlecraft had suggested Beppo, and, at the same time, had prompted and provoked a sympathetic study of Frere's Italian models, Berni and Pulci (see "Introduction to Beppo," Poetical Works, 1901, iv. 155-158; and "Introduction to The Morgante Maggiore" ibid., pp. 279-281); and, again, the success of Beppo, and, still more, a sense of inspiration and the conviction that he had found the path to excellence, suggested another essay of the ottava rima, a humorous poem "à la Beppo" on a larger and more important scale. If Byron possessed more than a superficial knowledge of the legendary "Don Juan," he was irresponsive and unimpressed. He speaks (letter to Murray, February 16, 1821) of "the Spanish tradition;" but there is nothing to show that he had read or heard of Tirso de Molina's (Gabriel Tellez) El Burlador de Sevilla y Convidado de Piedra (The Deceiver of Seville and the Stone Guest), 1626, which dramatized the "ower true tale" of the actual Don Juan Tenorio; or that he was acquainted with any of the Italian (e.g. Convitato di Pietra, del Dottor Giacinto Andrea Cicognini, Fiorentino [see L. Allacci Dramaturgia, 1755, 4º, p. 862]) or French adaptations of the legend (e.g. Le Festin de Pierre, ou le fils criminel, Tragi-comédie de De Villiers, 1659; and Molière's Dom Juan, ou Le Festin de Pierre, 1665). He had seen (vide post, ) Delpini's pantomime, which was based on Shadwell's Libertine, and he may have witnessed, at Milan or Venice, a performance of Mozart's Don Giovanni; but in taking Don Juan for his "hero," he took the name only, and disregarded the "terrible figure" "of the Titan of embodied evil, the likeness of sin made flesh" (see Selections from the Works of Lord Byron, by A.C. Swinburne, 1885, p. xxvi.), "as something to his purpose nothing"!

Why, then, did he choose the name, and what was the scheme or motif of his poem? Something is to be gathered from his own remarks and reflections; but it must be borne in mind that he is on the defensive, and that his half-humorous paradoxes were provoked by advice and opposition. Writing to Moore (September 19, 1818), he says, "I have finished the first canto ... of a poem in the style and manner of Beppo, encouraged by the good success of the same. It is ... meant to be a little quietly facetious upon every thing....