The Works of Lord Byron. Vol. 3 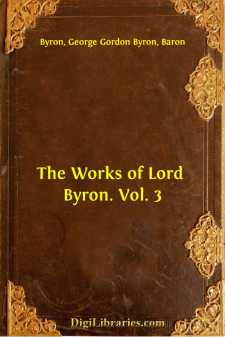 The Poems afterwards entitled "Occasional Pieces," which were included in the several editions of the Collected Works issued by Murray, 1819-1831, numbered fifty-seven in all. They may be described as the aggregate of the shorter poems written between the years 1809-1818, which the author thought worthy of a permanent place among his poetical works. Of these the first twenty-nine appeared in successive editions of Childe Harold (Cantos I., II.) «viz. fourteen in the first edition, twenty in the second, and twenty-nine in the seventh edition», while the thirtieth, the Ode on the Death of Sir Peter Parker, was originally attached to Hebrew Melodies. The remaining twenty-seven pieces consist of six poems first published in the Second Edition of the Corsair, 1814; eleven which formed the collection entitled "Poems," 1816; six which were appended to the Prisoner of Chillon, December, 1816; the Very Mournful Ballad, and the Sonnet by Vittorelli, which accompanied the Fourth Canto of Childe Harold, 1818; the Sketch, first included by Murray in his edition of 1819; and the Ode to Venice, which appeared in the same volume as Mazeppa.

Thus matters stood till 1831, when seventy new poems (sixty had been published by Moore, in Letters and Journals, 1830, six were republished from Hobhouse's Imitations and Translations, 1809, and four derived from other sources) were included in a sixth volume of the Collected Works.

In the edition of 1832-35, twenty-four new poems were added, but four which had appeared in Letters and Journals, 1830, and in the sixth volume of the edition of 1831 were omitted. In the one-volume edition (first issued in 1837 and still in print), the four short pieces omitted in 1832 once more found a place, and the lines on "John Keats," first published in Letters and Journals, and the two stanzas to Lady Caroline Lamb, "Remember thee! remember thee," first printed by Medwin, in the Conversations of Lord Byron, 1824, were included in the Collection.

The third volume of the present issue includes all minor poems (with the exception of epigrams and jeux d'esprit reserved for the sixth volume) written after Byron's departure for the East in July, 1809, and before he left England for good in April, 1816.

The "Separation" and its consequent exile afforded a pretext and an opportunity for the publication of a crop of spurious verses. Of these Madame Lavalette (first published in the Examiner, January 21, 1816, under the signature B.B., and immediately preceding a genuine sonnet by Wordsworth, "How clear, how keen, how marvellously bright!") and Oh Shame to thee, Land of the Gaul! included by Hone, in Poems on his Domestic Circumstances, 1816; and Farewell to England, Ode to the Isle of St. Helena, To the Lily of France, On the Morning of my Daughter's Birth, published by J. Johnston, 1816, were repudiated by Byron, in a letter to Murray, dated July 22, 1816. A longer poem entitled The Tempest, which was attached to the spurious Pilgrimage to the Holy Land, published by Johnston, "the Cheapside impostor," in 1817, was also denounced by Byron as a forgery in a letter to Murray, dated December 16, 1816.