The Works of Lord Byron: Letters and Journals. Vol. 1 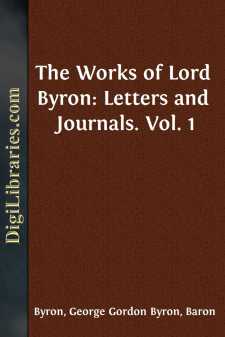 Two great collections of Byron's letters have been already printed. In Moore's 'Life', which appeared in 1830, 561 were given. These, in FitzGreene Halleck's American edition of Byron's 'Works', published in 1847, were increased to 635. The first volume of a third collection, edited by Mr. W. E. Henley, appeared early in 1897. A comparison of the number of letters contained in these three collections down to August 22, 1811, shows that Moore prints 61, Halleck 78, and Mr. Henley 88. In other words, the edition of 1897, which was the most complete so far as it goes, added 27 letters to that of 1830, and 10 to that of 1847. But it should be remembered that by far the greater part of the material added by Halleck and Mr. Henley was seen and rejected by Moore.

In preparing this volume for the press, use has been also made of a mass of material, bearing more or less directly on Byron's life, which was accumulated by the grandfather and father of Mr. Murray. The notes thus contain, it is believed, many details of biographical interest, which are now for the first time published.

It is necessary to make these comparisons, in order to define the position which this edition claims to hold with regard to its predecessors. On the other hand, no one can regret more sincerely than myself—no one has more cause to regret—the circumstances which placed this wealth of new material in my hands rather than in those of the true poet and brilliant critic, who, to enthusiasm for Byron, and wide acquaintance with the literature and social life of the day, adds the rarer gift of giving life and significance to bygone events or trivial details by unconsciously interesting his readers in his own living personality.

Byron's letters appeal on three special grounds to all lovers of English literature. They offer the most suggestive commentary on his poetry; they give the truest portrait of the man; they possess, at their best, in their ease, freshness, and racy vigour, a very high literary value.

The present volume, which covers the period from 1798 to August, 1811, includes the letters written Lord Byron from his eleventh to his twenty-third year. They therefore illustrate the composition of his youthful poetry, of 'English Bards, and Scotch Reviewers', and of the first two cantos of 'Childe Harold'. They carry his history down to the eve of that morning in March, 1812, when he awoke and found himself famous—in a degree and to an extent which to the present generation seem almost incomprehensible.

If the letters were selected for their literary value alone, it is probable that very few of those contained in the present volume would find a place in a collection formed on this principle. But biographical interest also demands consideration, and, in the case of Byron, this claim is peculiarly strong....