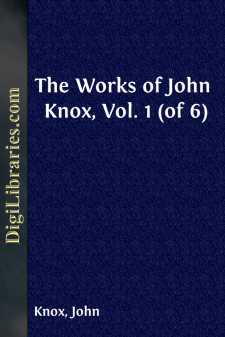 This publication of the Works of John Knox, it is supposed, will extend to Five Volumes. It was thought advisable to commence the series with his History of the Reformation in Scotland, as the work of greatest importance. The next volume will thus contain the Third and Fourth Books, which continue the History to the year 1564; at which period his historical labours may be considered to terminate. But the Fifth Book, forming a sequel to the History, and published under his name in 1644, will also be included. His Letters and Miscellaneous Writings will be arranged in the subsequent volumes, as nearly as possible in chronological order; each portion being introduced by a separate notice, respecting the manuscript or printed copies from which they have been taken.

It may perhaps be expected that a Life of the Author should have been prefixed to this volume. The Life of Knox, by Dr. MÊ»Crie, is however a work so universally known, and of so much historical value, as to supersede any attempt that might be made for a detailed biography; and none of the earlier sketches of his life is sufficiently minute or accurate to answer the purpose intended. In order to obviate the necessity of the reader having recourse to other authorities, I have added some chronological notices of the leading events in his life; reserving to the conclusion of the work any remarks, in connexion with this publication, that may seem to be requisite.

I was very desirous of obtaining a Portrait of the Reformer, to accompany this volume. Hitherto all my inquiries have failed to discover any undoubted original painting, among several which have either been so described, or engraved as such. In the meantime, a tolerably accurate fac-simile is given of the wood-cut portrait of Knox, included by Theodore Beza, in his volume entitled "Icones, id est, Veræ Imagines Virorum Doctrina simul et Pietate illustrium," &c., published at Geneva, in the year 1580, 4to. It is the earliest of the engraved portraits, and, so far as we can judge, it ought to serve as a kind of test by which other portraits must be tried. A similar head engraved on copper, is to be found in Verheiden's "Præstantium aliquot Theologorum, &c., Effigies," published at the Hague, in 1602, folio; but this, I apprehend, is merely an improved copy from Beza, and not taken from an original painting. It does not retain the expressive character of the ruder engraving, although the late Sir David Wilkie, whose opinion in such matters was second to none, was inclined to prefer this of Verheiden to any at least of the later portraits of the Reformer.

It may not here be superfluous to mention, that this publication was projected by the Editor many years ago, and that some arrangements had been entered into for having it printed in England. When the Wodrow Society, therefore, expressed a willingness to undertake the work, I proposed as a necessary condition, that I should have the privilege of causing a limited impression to be thrown off, for sale, chiefly in England; and the Council, in the most liberal manner, at once acquiesced in this proposal....