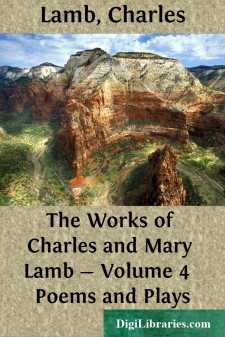 The earliest poem in this volume bears the date 1794, when Lamb was nineteen, the latest 1834, the year of his death; so that it covers an even longer period of his life than Vol. I.—the "Miscellaneous Prose." The chronological order which was strictly observed in that volume has been only partly observed in the following pages—since it seemed better to keep the plays together and to make a separate section of Lamb's epigrams. These, therefore, will be found to be outside the general scheme. Such of Lamb's later poems as he did not himself collect in volume form will also be found to be out of their chronological position, partly because it has seemed to me best to give prominence to those verses which Lamb himself reprinted, and partly because there is often no indication of the year in which the poem was written.

Another difficulty has been the frequency with which Lamb reprinted some of his earlier poetry. The text of many of his earliest and best poems was not fixed until 1818, twenty years or so after their composition. It had to be decided whether to print these poems in their true order as they were first published—in Coleridge's Poems on Various Subjects, 1796; in Charles Lloyd's ems on the Death of Priscilla Farmer, 1796; in Coleridge's Poems, second edition, 1797; in Blank Verse by Charles Lloyd and Charles Lamb, 1798; and in John Woodvil, 1802—with all their early readings; or whether to disregard chronological sequence, and wait until the time of the Works—1818—had come, and print them all together then. I decided, in the interests of their biographical value, to print them in the order as they first appeared, particularly as Crabb Robinson tells us that Lamb once said of the arrangement of a poet's works: "There is only one good order—and that is the order in which they were written—that is a history of the poet's mind." It then had to be decided whether to print them in their first shape, which, unless I repeated them later, would mean the relegation of Lamb's final text to the Notes, or to print them, at the expense of a slight infringement upon the chronological scheme, in their final 1818 state, and relegate all earlier readings to the Notes. After much deliberation I decided that to print them in their final 1818 state was best, and this therefore I did in the large edition of 1903, to which the student is referred for all variorum readings, fuller notes and many illustrations, and have repeated here. In order, however, that the scheme of Lamb's 1818 edition of his Works might be preserved, I have indicated in the text the position in the Works occupied by all the poems that in the present volume have been printed earlier.

The chronological order, in so far as it has been followed, emphasises the dividing line between Lamb's poetry and his verse. As he grew older his poetry, for the most part, passed into his prose. His best and truest poems, with few exceptions, belong to the years before, say, 1805, when he was thirty....