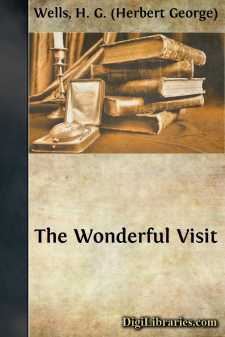 On the Night of the Strange Bird, many people at Sidderton (and some nearer) saw a Glare on the Sidderford moor. But no one in Sidderford saw it, for most of Sidderford was abed.

All day the wind had been rising, so that the larks on the moor chirruped fitfully near the ground, or rose only to be driven like leaves before the wind. The sun set in a bloody welter of clouds, and the moon was hidden. The glare, they say, was golden like a beam shining out of the sky, not a uniform blaze, but broken all over by curving flashes like the waving of swords. It lasted but a moment and left the night dark and obscure. There were letters about it in Nature, and a rough drawing that no one thought very like. (You may see it for yourself—the drawing that was unlike the glare—on page 42 of Vol. cclx. of that publication.)

None in Sidderford saw the light, but Annie, Hooker Durgan's wife, was lying awake, and she saw the reflection of it—a flickering tongue of gold—dancing on the wall.

She, too, was one of those who heard the sound. The others who heard the sound were Lumpy Durgan, the half-wit, and Amory's mother. They said it was a sound like children singing and a throbbing of harp strings, carried on a rush of notes like that which sometimes comes from an organ. It began and ended like the opening and shutting of a door, and before and after they heard nothing but the night wind howling over the moor and the noise of the caves under Sidderford cliff. Amory's mother said she wanted to cry when she heard it, but Lumpy was only sorry he could hear no more.

That is as much as anyone can tell you of the glare upon Sidderford Moor and the alleged music therewith. And whether these had any real connexion with the Strange Bird whose history follows, is more than I can say. But I set it down here for reasons that will be more apparent as the story proceeds.

The Coming of the Strange Bird. II.

Sandy Bright was coming down the road from Spinner's carrying a side of bacon he had taken in exchange for a clock. He saw nothing of the light but he heard and saw the Strange Bird. He suddenly heard a flapping and a voice like a woman wailing, and being a nervous man and all alone, he was alarmed forthwith, and turning (all a-tremble) saw something large and black against the dim darkness of the cedars up the hill. It seemed to be coming right down upon him, and incontinently he dropped his bacon and set off running, only to fall headlong.

He tried in vain—such was his state of mind—to remember the beginning of the Lord's Prayer. The strange bird flapped over him, something larger than himself, with a vast spread of wings, and, as he thought, black. He screamed and gave himself up for lost. Then it went past him, sailing down the hill, and, soaring over the vicarage, vanished into the hazy valley towards Sidderford.

And Sandy Bright lay upon his stomach there, for ever so long, staring into the darkness after the strange bird. At last he got upon his knees and began to thank Heaven for his merciful deliverance, with his eyes downhill. He went on down into the village, talking aloud and confessing his sins as he went, lest the strange bird should come back....