The Women of the French Salons 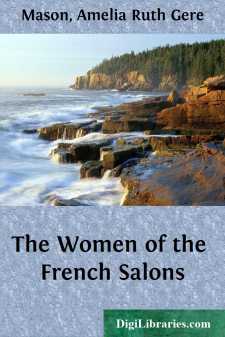 It has been a labor of love with many distinguished Frenchmen to recall the memories of the women who have made their society so illustrious, and to retouch with sympathetic insight the features which time was beginning to dim. One naturally hesitates to enter a field that has been gleaned so carefully, and with such brilliant results, by men like Cousin, Sainte-Beuve, Goncourt, and others of lesser note. But the social life of the two centuries in which women played so important a role in France is always full of human interest from whatever point of view one may regard it. If there is not a great deal to be said that is new, old facts may be grouped afresh, and old modes of life and thought measured by modern standards.

In searching through the numerous memoirs, chronicles, letters, and original manuscripts in which the records of these centuries are hidden away, nothing has struck me so forcibly as the remarkable mental vigor and the far-reaching influence of women whose theater was mainly a social one. Though society has its frivolities, it has also its serious side, and it is through the phase of social evolution that was begun in the salons that women have attained the position they hold today. However beautiful, or valuable, or poetic may have been the feminine types of other nationalities, it is in France that we find the forerunners of the intelligent, self-poised, clear-sighted, independent modern woman. It is possible that in the search for larger fields the smaller but not less important ones have been in a measure forgotten. The great stream of civilization flows from a thousand unnoted rills that make sweet music in their course, and swell the current as surely as the more noisy torrent. The conditions of the past cannot be revived, nor are they desirable. The present has its own theories and its own methods. But at a time when the reign of luxury is rapidly establishing false standards, and the best intellectual life makes hopeless struggles against an ever aggressive materialism, it may be profitable as well as interesting to consider the possibilities that lie in a society equally removed from frivolity and pretension, inspired by the talent, the sincerity, and the moral force of American women, and borrowing a new element of fascination from the simple and charming but polite informality of the old salons.

It has been the aim in these studies to gather within a limited compass the women who represented the social life of their time on its most intellectual side, and to trace lightly their influence upon civilization through the avenues of literature and manners. Though the work may lose something in fullness from the effort to put so much into so small a space, perhaps there is some compensation in the opportunity of comparing, in one gallery, the women who exercised the greatest power in France for a period of more than two hundred years. The impossibility of entering into the details of so many lives in a single volume is clearly apparent....