The Wolves and the Lamb 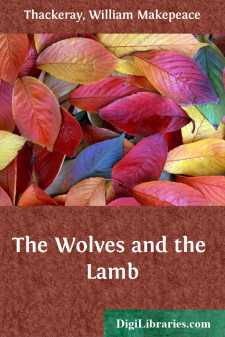 THE WOLVES AND THE LAMB. ACT I.

Scene.—MILLIKEN'S villa at Richmond; two drawing-rooms opening into one another. The late MRS. MILLIKEN'S portrait over the mantel-piece; bookcases, writing-tables, piano, newspapers, a handsomely furnished saloon. The back-room opens, with very large windows, on the lawn and pleasure-ground; gate, and wall—over which the heads of a cab and a carriage are seen, as persons arrive. Fruit, and a ladder on the walls. A door to the dining-room, another to the sleeping-apartments, &c.

JOHN.—Everybody out; governor in the city; governess (heigh-ho!) walking in the Park with the children; ladyship gone out in the carriage. Let's sit down and have a look at the papers. Buttons fetch the Morning Post out of Lady Kicklebury's room. Where's the Daily News, sir?

JOHN.—Milliken! you scoundrel! What do you mean by Milliken? Speak of your employer as your governor if you like; but not as simple Milliken. Confound your impudence! you'll be calling me Howell next.

PAGE.—Well! I didn't know. YOU call him Milliken.

JOHN.—Because I know him, because I'm intimate with him, because there's not a secret he has but I may have it for the asking; because the letters addressed to Horace Milliken, Esq., might as well be addressed John Howell, Esq., for I read 'em, I put 'em away and docket 'em, and remember 'em. I know his affairs better than he does: his income to a shilling, pay his tradesmen, wear his coats if I like. I may call Mr. Milliken what I please; but not YOU, you little scamp of a clod-hopping ploughboy. Know your station and do your business, or you don't wear THEM buttons long, I promise you. [Exit Page.]

Let me go on with the paper [reads]. How brilliant this writing is! Times, Chronicle, Daily News, they're all good, blest if they ain't. How much better the nine leaders in them three daily papers is, than nine speeches in the House of Commons! Take a very best speech in the 'Ouse now, and compare it with an article in The Times! I say, the newspaper has the best of it for philosophy, for wit, novelty, good sense too. And the party that writes the leading article is nobody, and the chap that speaks in the House of Commons is a hero. Lord, Lord, how the world is 'umbugged! Pop'lar representation! what IS pop'lar representation? Dammy, it's a farce. Hallo! this article is stole! I remember a passage in Montesquieu uncommonly like it. [Goes and gets the book. As he is standing upon sofa to get it, and sitting down to read it, MISS PRIOR and the Children have come in at the garden. Children pass across stage. MISS PRIOR enters by open window, bringing flowers into the room.]

JOHN.—It IS like it. [He slaps the book, and seeing MISS PRIOR who enters, then jumps up from sofa, saying very respectfully,]

MISS P.—[sarcastically.] Do I disturb you, Howell?

JOHN.—Disturb! I have no right to say—a servant has no right to be disturbed, but I hope I may be pardoned for venturing to look at a volume in the libery, Miss, just in reference to a newspaper harticle—that's all, Miss....