The Witch of Prague 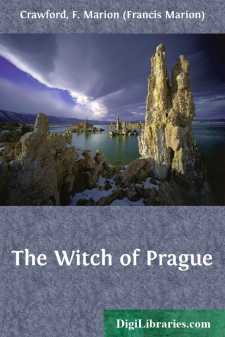 A great multitude of people filled the church, crowded together in the old black pews, standing closely thronged in the nave and aisles, pressing shoulder to shoulder even in the two chapels on the right and left of the apse, a vast gathering of pale men and women whose eyes were sad and in whose faces was written the history of their nation. The mighty shafts and pilasters of the Gothic edifice rose like the stems of giant trees in a primeval forest from a dusky undergrowth, spreading out and uniting their stony branches far above in the upper gloom. From the clerestory windows of the nave an uncertain light descended halfway to the depths and seemed to float upon the darkness below as oil upon the water of a well. Over the western entrance the huge fantastic organ bristled with blackened pipes and dusty gilded ornaments of colossal size, like some enormous kingly crown long forgotten in the lumber room of the universe, tarnished and overlaid with the dust of ages. Eastwards, before the rail which separated the high altar from the people, wax torches, so thick that a man might not span one of them with both his hands, were set up at irregular intervals, some taller, some shorter, burning with steady, golden flames, each one surrounded with heavy funeral wreaths, and each having a tablet below it, whereon were set forth in the Bohemian idiom, the names, titles, and qualities of him or her in whose memory it was lighted. Innumerable lamps and tapers before the side altars and under the strange canopied shrines at the bases of the pillars, struggled ineffectually with the gloom, shedding but a few sickly yellow rays upon the pallid faces of the persons nearest to their light.

Suddenly the heavy vibration of a single pedal note burst from the organ upon the breathing silence, long drawn out, rich, voluminous, and imposing. Presently, upon the massive bass, great chords grew up, succeeding each other in a simple modulation, rising then with the blare of trumpets and the simultaneous crash of mixtures, fifteenths and coupled pedals to a deafening peal, then subsiding quickly again and terminating in one long sustained common chord. And now, as the celebrant bowed at the lowest step before the high altar, the voices of the innumerable congregation joined the harmony of the organ, ringing up to the groined roof in an ancient Slavonic melody, melancholy and beautiful, and rendered yet more unlike all other music by the undefinable character of the Bohemian language, in which tones softer than those of the softest southern tongue alternate so oddly with rough gutturals and strident sibilants.

The Wanderer stood in the midst of the throng, erect, taller than the men near him, holding his head high, so that a little of the light from the memorial torches reached his thoughtful, manly face, making the noble and passionate features to stand out clearly, while losing its power of illumination in the dark beard and among the shadows of his hair. His was a face such as Rembrandt would have painted, seen under the light that Rembrandt loved best; for the expression seemed to overcome the surrounding gloom by its own luminous quality, while the deep gray eyes were made almost black by the wide expansion of the pupils; the dusky brows clearly defined the boundary in the face between passion and thought, and the pale forehead, by its slight recession into the shade from its middle prominence, proclaimed the man of heart, the man of faith, the man of devotion, as well as the intuitive nature of the delicately sensitive mind and the quick, elastic qualities of the man's finely organized, but nervous bodily constitution....