The Wit of a Duck and Other Papers 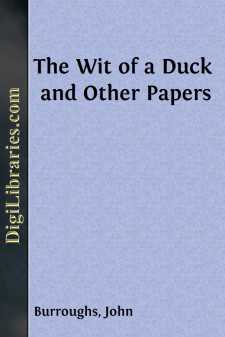 John Burroughs was born April 3, 1837, in a little farmhouse among the Catskill Mountains. He was, like most other country boys, acquainted with all the hard work of farm life and enjoyed all the pleasures of the woods and streams. His family was poor, and he was forced at an early date to earn his own living, which he did by teaching school. At the age of twenty-five he chanced to read a volume of Audubon, and this proved the turning-point in his life, inspiring a new zeal for the study of birds and enabling him to see with keener eyes not only the birds themselves, but their nests and surroundings, and to hear with more discernment the peculiar calls and songs of each.

About the time of the Civil War he accepted a clerkship in the Treasury Department at Washington, where he remained nine years. It was here that he wrote his first book, "Wake-Robin," and a part of the second, "Winter Sunshine." He says: "It enabled me to live over again the days I had passed with the birds and in the scenes of my youth. I wrote the book sitting at a desk in front of an iron wall. I was the keeper of a vault in which many millions of banknotes were stored. During my long periods of leisure I took refuge in my pen. How my mind reacted from the iron wall in front of me, and sought solace in memories of the birds and of summer fields and woods!" In 1873 he exchanged the iron wall in front of his desk for a large window overlooking the Hudson, and the vault for a vineyard. Since then he has lived on the banks of the Hudson in the midst of the woods and fields which he most enjoys, adding daily to his fund of information regarding the ways of nature. His close habit of observation, coupled with his rare gift of imparting to the reader something of his own interest and enthusiasm, has enabled him to interpret nature in a most delightfully fascinating way. He gives the key to his own success when he says, "If I name every bird I see in my walk, describe its color and ways, etc., give a lot of facts or details about the bird, it is doubtful if my reader is interested. But if I relate the bird in some way to human life, to my own life,—show what it is to me and what it is in the landscape and the season,—then do I give my reader a live bird and not a labeled specimen."

Mr. Burroughs thoroughly enjoys the country life, and in his strolls through the woods or in the fields he is always ready to stop and investigate anything new or interesting that he may chance to see among the birds, or squirrels, or bees, or insects. His long life of observation and study has developed remarkably quick eyesight and a keen sense of hearing, which enable him to detect all the activities of nature and to place a correct interpretation upon them to an extent that few other naturalists have realized.

When he writes he is simply living over again the experiences which have delighted him, and the best explanation of the rare pleasure that is imparted by his writings to every reader is given in his own words: "I cannot bring myself to think of my books as 'works,' because so little 'work' has gone to the making of them....