The Winning of Canada: a Chronicle of Wolf 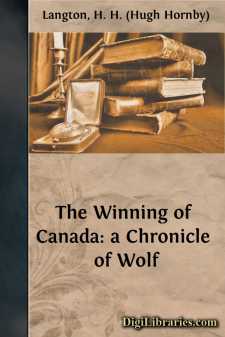 Wolfe was a soldier born. Many of his ancestors had stood ready to fight for king and country at a moment's notice. His father fought under the great Duke of Marlborough in the war against France at the beginning of the eighteenth century. His grandfather, his great-grandfather, his only uncle, and his only brother were soldiers too. Nor has the martial spirit deserted the descendants of the Wolfes in the generation now alive. They are soldiers still. The present head of the family, who represented it at the celebration of the tercentenary of the founding of Quebec, fought in Egypt for Queen Victoria; and the member of it who represented Wolfe on that occasion, in the pageant of the Quebec campaign, is an officer in the Canadian army under George V.

The Wolfes are of an old and honourable line. Many hundreds of years ago their forefathers lived in England and later on in Wales. Later still, in the fifteenth century, before America was discovered, they were living in Ireland. Wolfe's father, however, was born in England; and, as there is no evidence that any of his ancestors in Ireland had married other than English Protestants, and as Wolfe's mother was also English, we may say that the victor of Quebec was a pure-bred Englishman. Among his Anglo-Irish kinsmen were the Goldsmiths and the Seymours. Oliver Goldsmith himself was always very proud of being a cousin of the man who took Quebec.

Wolfe's mother, to whom he owed a great deal of his genius; was a descendant of two good families in Yorkshire. She was eighteen years younger than his father, and was very tall and handsome. Wolfe thought there was no one like her. When he was a colonel, and had been through the wars and at court, he still believed she was 'a match for all the beauties.' He was not lucky enough to take after her in looks, except in her one weak feature, a cutaway chin. His body, indeed, seems to have been made up of the bad points of both parents: he had his rheumatism from his father. But his spirit was made up of all their good points; and no braver ever lived in any healthy body than in his own sickly, lanky six foot three.

Wolfe's parents went to live at Westerham in Kent shortly after they were married; and there, on January 2, 1727, in the vicarage—where Mrs Wolfe was staying while her husband was away on duty with his regiment—the victor of Quebec was born. Two other houses in the little country town of Westerham are full of memories of Wolfe. One of these was his father's, a house more than two hundred years old when he was born. It was built in the reign of Henry VII, and the loyal subject who built it had the king's coat of arms carved over the big stone fireplace. Here Wolfe and his younger brother Edward used to sit in the winter evenings with their mother, while their veteran father told them the story of his long campaigns. So, curiously enough, it appears that Wolfe, the soldier who won Canada for England in 1759, sat under the arms of the king in whose service the sailor Cabot hoisted the flag of England over Canadian soil in 1497....