The Wings of the Morning 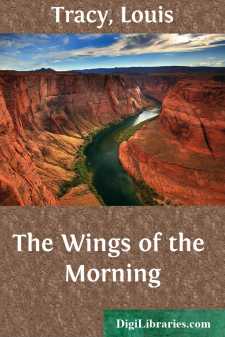 CHAPTER I THE WRECK OF THE SIRDAR

Lady Tozer adjusted her gold-rimmed eye-glasses with an air of dignified aggressiveness. She had lived too many years in the Far East. In Hong Kong she was known as the "Mandarin." Her powers of merciless inquisition suggested torments long drawn out. The commander of the Sirdar, homeward bound from Shanghai, knew that he was about to be stretched on the rack when he took his seat at the saloon table.

"Is it true, captain, that we are running into a typhoon?" demanded her ladyship.

"From whom did you learn that, Lady Tozer?" Captain Ross was wary, though somewhat surprised.

"From Miss Deane. I understood her a moment ago to say that you had told her."

"Didn't you? Some one told me this morning. I couldn't have guessed it, could I?" Miss Iris Deane's large blue eyes surveyed him with innocent indifference to strict accuracy. Incidentally, she had obtained the information from her maid, a nose-tilted coquette who extracted ship's secrets from a youthful quartermaster.

Lady Tozer was unusually abrupt today. But she was annoyed by the assumption that the captain took a mere girl into his confidence and passed over the wife of the ex-Chief Justice of Hong Kong.

"Yes, it is," said Captain Ross, equally curt, and silently thanking the fates that her ladyship was going home for the last time.

"How horrible!" she gasped, in unaffected alarm. This return to femininity soothed the sailor's ruffled temper.

Sir John, her husband, frowned judicially. That frown constituted his legal stock-in-trade, yet it passed current for wisdom with the Hong Kong bar.

"What evidence have you?" he asked.

"Do tell us," chimed in Iris, delightfully unconscious of interrupting the court. "Did you find out when you squinted at the sun?"

The captain smiled. "You are nearer the mark than possibly you imagine, Miss Deane," he said. "When we took our observations yesterday there was a very weird-looking halo around the sun. This morning you may have noticed several light squalls and a smooth sea marked occasionally by strong ripples. The barometer is falling rapidly, and I expect that, as the day wears, we will encounter a heavy swell. If the sky looks wild tonight, and especially if we observe a heavy bank of cloud approaching from the north-west, you see the crockery dancing about the table at dinner. I am afraid you are not a good sailor, Lady Tozer. Are you, Miss Deane?"

"Capital! I should just love to see a real storm. Now promise me solemnly that you will take me up into the charthouse when this typhoon is simply tearing things to pieces."

"Oh dear! I do hope it will not be very bad. Is there no way in which you can avoid it, captain? Will it last long?"

The politic skipper for once preferred to answer Lady Tozer. "There is no cause for uneasiness," he said. "Of course, typhoons in the China Sea are nasty things while they last, but a ship like the Sirdar is not troubled by them....