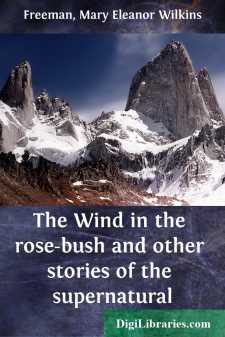 THE WIND IN THE ROSE-BUSH

Ford Village has no railroad station, being on the other side of the river from Porter's Falls, and accessible only by the ford which gives it its name, and a ferry line.

The ferry-boat was waiting when Rebecca Flint got off the train with her bag and lunch basket. When she and her small trunk were safely embarked she sat stiff and straight and calm in the ferry-boat as it shot swiftly and smoothly across stream. There was a horse attached to a light country wagon on board, and he pawed the deck uneasily. His owner stood near, with a wary eye upon him, although he was chewing, with as dully reflective an expression as a cow. Beside Rebecca sat a woman of about her own age, who kept looking at her with furtive curiosity; her husband, short and stout and saturnine, stood near her. Rebecca paid no attention to either of them. She was tall and spare and pale, the type of a spinster, yet with rudimentary lines and expressions of matronhood. She all unconsciously held her shawl, rolled up in a canvas bag, on her left hip, as if it had been a child. She wore a settled frown of dissent at life, but it was the frown of a mother who regarded life as a froward child, rather than as an overwhelming fate.

The other woman continued staring at her; she was mildly stupid, except for an over-developed curiosity which made her at times sharp beyond belief. Her eyes glittered, red spots came on her flaccid cheeks; she kept opening her mouth to speak, making little abortive motions. Finally she could endure it no longer; she nudged Rebecca boldly.

"A pleasant day," said she.

Rebecca looked at her and nodded coldly.

"Have you come far?"

"I have come from Michigan."

"Oh!" said the woman, with awe. "It's a long way," she remarked presently.

"Yes, it is," replied Rebecca, conclusively.

Still the other woman was not daunted; there was something which she determined to know, possibly roused thereto by a vague sense of incongruity in the other's appearance. "It's a long ways to come and leave a family," she remarked with painful slyness.

"I ain't got any family to leave," returned Rebecca shortly.

Rebecca looked straight ahead at the race of the river.

It was a long ferry. Finally Rebecca herself waxed unexpectedly loquacious. She turned to the other woman and inquired if she knew John Dent's widow who lived in Ford Village. "Her husband died about three years ago," said she, by way of detail.

The woman started violently. She turned pale, then she flushed; she cast a strange glance at her husband, who was regarding both women with a sort of stolid keenness.

"Yes, I guess I do," faltered the woman finally.

"Well, his first wife was my sister," said Rebecca with the air of one imparting important intelligence.

"Was she?" responded the other woman feebly. She glanced at her husband with an expression of doubt and terror, and he shook his head forbiddingly.

"I'm going to see her, and take my niece Agnes home with me," said Rebecca....