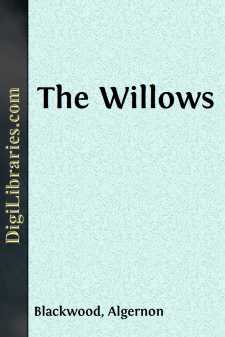 After leaving Vienna, and long before you come to Budapest, the Danube enters a region of singular loneliness and desolation, where its waters spread away on all sides regardless of a main channel, and the country becomes a swamp for miles upon miles, covered by a vast sea of low willow-bushes. On the big maps this deserted area is painted in a fluffy blue, growing fainter in color as it leaves the banks, and across it may be seen in large straggling letters the word Sumpfe, meaning marshes.

In high flood this great acreage of sand, shingle-beds, and willow-grown islands is almost topped by the water, but in normal seasons the bushes bend and rustle in the free winds, showing their silver leaves to the sunshine in an ever-moving plain of bewildering beauty. These willows never attain to the dignity of trees; they have no rigid trunks; they remain humble bushes, with rounded tops and soft outline, swaying on slender stems that answer to the least pressure of the wind; supple as grasses, and so continually shifting that they somehow give the impression that the entire plain is moving and alive. For the wind sends waves rising and falling over the whole surface, waves of leaves instead of waves of water, green swells like the sea, too, until the branches turn and lift, and then silvery white as their underside turns to the sun.

Happy to slip beyond the control of the stern banks, the Danube here wanders about at will among the intricate network of channels intersecting the islands everywhere with broad avenues down which the waters pour with a shouting sound; making whirlpools, eddies, and foaming rapids; tearing at the sandy banks; carrying away masses of shore and willow-clumps; and forming new islands innumerably which shift daily in size and shape and possess at best an impermanent life, since the flood-time obliterates their very existence.

Properly speaking, this fascinating part of the river's life begins soon after leaving Pressburg, and we, in our Canadian canoe, with gipsy tent and frying-pan on board, reached it on the crest of a rising flood about mid-July. That very same morning, when the sky was reddening before sunrise, we had slipped swiftly through still-sleeping Vienna, leaving it a couple of hours later a mere patch of smoke against the blue hills of the Wienerwald on the horizon; we had breakfasted below Fischeramend under a grove of birch trees roaring in the wind; and had then swept on the tearing current past Orth, Hainburg, Petronell (the old Roman Carnuntum of Marcus Aurelius), and so under the frowning heights of Thelsen on a spur of the Carpathians, where the March steals in quietly from the left and the frontier is crossed between Austria and Hungary.

Racing along at twelve kilometers an hour soon took us well into Hungary, and the muddy waters—sure sign of flood—sent us aground on many a shingle-bed, and twisted us like a cork in many a sudden belching whirlpool before the towers of Pressburg (Hungarian, Poszony) showed against the sky; and then the canoe, leaping like a spirited horse, flew at top speed under the grey walls, negotiated safely the sunken chain of the Fliegende Brucke ferry, turned the corner sharply to the left, and plunged on yellow foam into the wilderness of islands, sandbanks, and swamp-land beyond—the land of the willows....