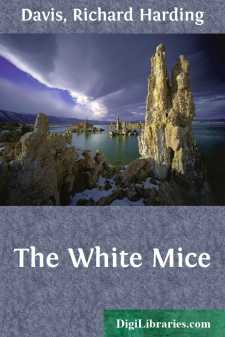 Once upon a time a lion dropped his paw upon a mouse.

“Please let me live!” begged the mouse, “and some day I will do as much for you.”

“That is so funny,” roared the king of beasts, “that we will release you. We had no idea mice had a sense of humor.”

And then, as you remember, the lion was caught in the net of the hunter, and struggled, and fought, and struck blindly, until his spirit and strength were broken, and he lay helpless and dying.

And the mouse, happening to pass that way, gnawed and nibbled at the net, and gave the lion his life.

The morals are: that an appreciation of humor is a precious thing; that God moves in a mysterious way, His wonders to perform, and that you never can tell.

In regard to this fable it is urged that, according to the doctrine of chances, it is extremely unlikely that at the very moment the lion lay bound and helpless the very same mouse should pass by. But the explanation is very simple and bromidic.

It is this—that this is a small world.

People who are stay-at-home bodies come to believe the whole world is the village in which they live. People who are rolling-stones claim that if you travel far enough and long enough the whole world becomes as one village; that sooner or later you make friends with every one in it; that the only difference between the stay-at-homes and the gadabouts is that while the former answer local telephone calls, the others receive picture postal-cards. There is a story that seems to illustrate how small this world is. In fact, this is the story.

General Don Miguel Rojas, who as a young man was called the Lion of Valencia, and who later had honorably served Venezuela as Minister of Foreign Affairs, as Secretary of War, as Minister to the Court of St. James and to the Republic of France, having reached the age of sixty found himself in a dungeon-cell underneath the fortress in the harbor of Porto Cabello. He had been there two years. The dungeon was dark and very damp, and at high-tide the waters of the harbor oozed through the pores of the limestone walls. The air was the air of a receiving-vault, and held the odor of a fisherman’s creel.

General Rojas sat huddled upon a canvas cot, with a blanket about his throat and a blanket about his knees, reading by the light of a candle the story of Don Quixote. Sometimes a drop of water fell upon the candle and it sputtered, and its light was nearly lost in the darkness. Sometimes so many drops gathered upon the white head of the Lion of Valencia that he sputtered, too, and coughed so violently that, in agony, he beat with feeble hands upon his breast. And his light, also, nearly escaped into the darkness.

On the other side of the world, four young Americans, with legs crossed and without their shoes, sat on the mats of the tea-house of the Hundred and One Steps. On their sun-tanned faces was the glare of Yokohama Bay, in their eyes the light of youth, of intelligent interest, of adventure. In the hand of each was a tiny cup of acrid tea. Three of them were under thirty, and each wore the suit of silk pongee that in eighteen hours C....