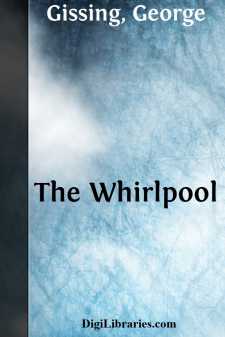 Harvey Rolfe was old enough to dine with deliberation, young and healthy enough to sauce with appetite the dishes he thoughtfully selected. You perceived in him the imperfect epicure. His club had no culinary fame; the dinner was merely tolerable; but Rolfe's unfinished palate flattered the second-rate cook. He knew nothing of vintages; it sufficed him to distinguish between Bordeaux and Burgundy; yet one saw him raise his glass and peer at the liquor with eye of connoisseur. All unaffectedly; for he was conscious of his shortcoming in the art of delicate living, and never vaunted his satisfactions. He had known the pasture of poverty, and the table as it is set by London landladies; to look back on these things was to congratulate himself that nowadays he dined.

Beyond the achievement of a vague personal distinction at the Metropolitan Club, he had done nothing to make himself a man of note, and it was doubtful whether more than two or three of the members really liked him or regarded him with genuine interest. His introduction to this circle he owed to an old friend, Hugh Carnaby, whose social position was much more clearly defined: Hugh Carnaby, the rambler, the sportsman, and now for a twelvemonth the son-in-law of Mrs. Ascott Larkfield. Through Carnaby people learnt as much of his friend's history as it concerned anyone to know: that Harvey Rolfe had begun with the study of medicine, had given it up in disgust, subsequently was 'in business', and withdrew from it on inheriting a competency. They were natives of the same county, and learnt their Latin together at the Grammar School of Greystone, the midland town which was missed by the steam highroad, and so preserves much of the beauty and tranquillity of days gone by. Rolfe seldom spoke of his own affairs, but in talking of travel he had been heard to mention that his father had engineered certain lines of foreign railway. It seemed that Harvey had no purpose in life, save that of enjoying himself. Obviously he read a good deal, and Carnaby credited him with profound historical knowledge; but he neither wrote nor threatened to do so. Something of cynicism appeared in his talk of public matters; politics amused him, and his social views lacked consistency, tending, however, to an indolent conservatism. Despite his convivial qualities, he had traits of the reserved, even of the unsociable, man: a slight awkwardness in bearing, a mute shyness with strangers, a hesitancy in ordinary talk, and occasional bluntness of assertion or contradiction, suggesting a contempt which possibly he did not intend. Hugh Carnaby declared that the true Rolfe only showed himself after a bottle of wine; maintained, moreover, that Harvey had vastly improved since he entered upon a substantial income. When Rolfe was five and twenty, Hugh being two years younger, they met after a long separation, and found each other intolerable; a decade later their meeting led to hearty friendship. Rolfe had become independent, and was tasting his freedom in a twelvemonth's travel....