The Wheels of Chance: a Bicycling Idyll 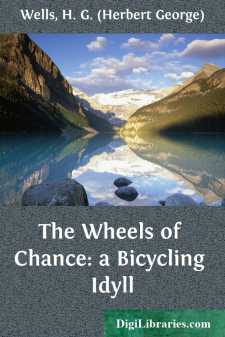 I. THE PRINCIPAL CHARACTER IN THE STORY

If you (presuming you are of the sex that does such things)—if you had gone into the Drapery Emporium—which is really only magnificent for shop—of Messrs. Antrobus & Co.—a perfectly fictitious "Co.," by the bye—of Putney, on the 14th of August, 1895, had turned to the right-hand side, where the blocks of white linen and piles of blankets rise up to the rail from which the pink and blue prints depend, you might have been served by the central figure of this story that is now beginning. He would have come forward, bowing and swaying, he would have extended two hands with largish knuckles and enormous cuffs over the counter, and he would have asked you, protruding a pointed chin and without the slightest anticipation of pleasure in his manner, what he might have the pleasure of showing you. Under certain circumstances—as, for instance, hats, baby linen, gloves, silks, lace, or curtains—he would simply have bowed politely, and with a drooping expression, and making a kind of circular sweep, invited you to "step this way," and so led you beyond his ken; but under other and happier conditions,—huckaback, blankets, dimity, cretonne, linen, calico, are cases in point,—he would have requested you to take a seat, emphasising the hospitality by leaning over the counter and gripping a chair back in a spasmodic manner, and so proceeded to obtain, unfold, and exhibit his goods for your consideration. Under which happier circumstances you might—if of an observing turn of mind and not too much of a housewife to be inhuman—have given the central figure of this story less cursory attention.

Now if you had noticed anything about him, it would have been chiefly to notice how little he was noticeable. He wore the black morning coat, the black tie, and the speckled grey nether parts (descending into shadow and mystery below the counter) of his craft. He was of a pallid complexion, hair of a kind of dirty fairness, greyish eyes, and a skimpy, immature moustache under his peaked indeterminate nose. His features were all small, but none ill-shaped. A rosette of pins decorated the lappel of his coat. His remarks, you would observe, were entirely what people used to call cliche, formulae not organic to the occasion, but stereotyped ages ago and learnt years since by heart. "This, madam," he would say, "is selling very well." "We are doing a very good article at four three a yard." "We could show you something better, of course." "No trouble, madam, I assure you." Such were the simple counters of his intercourse. So, I say, he would have presented himself to your superficial observation. He would have danced about behind the counter, have neatly refolded the goods he had shown you, have put on one side those you selected, extracted a little book with a carbon leaf and a tinfoil sheet from a fixture, made you out a little bill in that weak flourishing hand peculiar to drapers, and have bawled "Sayn!" Then a puffy little shop-walker would have come into view, looked at the bill for a second, very hard (showing you a parting down the middle of his head meanwhile), have scribbled a still more flourishing J....