The Wharf by the Docks A Novel 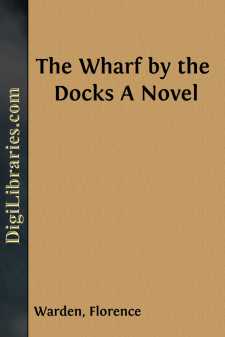 Everybody knows Canterbury, with its Old-World charms and its ostentatious air of being content to be rather behind the times, of looking down upon the hurrying Americans who dash through its cathedral and take snap-shots at its slums, and at all those busy moderns who cannot afford to take life at its own jog-trot pace.

But everybody does not know the charming old halls and comfortable, old-fashioned mansions which are dotted about the neighboring country, either nestling in secluded nooks of the Kentish valleys or holding a stately stand on the wooded hills.

Of this latter category was The Beeches, a pretty house of warm, red brick, with a dignified Jacobean front, which stood upon the highest ground of a prettily wooded park, and commanded one of those soft, undulating, sleepy landscapes which are so characteristically English, and of which grazing sheep and ruminating cows form so important a feature. A little tame, perhaps, but very pleasant, very homely, very sweet to look upon by the tired eyes that have seen enough of the active, bustling world.

Mr. George Wedmore, of the firm of Wedmore, Parkinson and Bishop, merchants of the city of London, had bought back the place, which had formerly belonged to his family, from the Jews into whose hands it had fallen, and had settled there to spend in retirement the latter end of his life, surrounded by a family who were not too well pleased to exchange busy Bayswater for what they were flippant enough to call a wilderness.

Dinner was over; and Mr. Wedmore, in a snug easy-chair by the dining-room fire, was waiting for Doctor Haselden, who often looked in for a smoke and a game of chess with the owner of The Beeches.

A lean, fidgety man, with thin hair and grayish whiskers, Mr. Wedmore looked less at home in the velveteen suit and gaiters which he persisted in wearing even in the evening, less like the country gentleman it was his ambition to be, than like the care-laden city merchant he at heart still was.

On the other side of the table sat his better half, in whom it was easy to see he must have found all the charm of contrast to his own personality. A cheery, buxom woman, still handsome, full of life and fun, she had held for the whole of her married life a sway over her lord and master all the greater that neither of them was conscious of the fact. A most devoted and submissive wife, a most indulgent and affectionate mother, Mrs. Wedmore occupied the not unenviable position of being half slave, half idol in her own household.

The clock struck eight, and the bell rang.

"There he is! There's the doctor!" cried Mrs. Wedmore, with a beaming nod. Her husband sat up in his chair, and the troubled frown which he had worn all the evening grew a little deeper.

"I should like you, my dear, to leave us together this evening," said he.

Mrs. Wedmore jumped up at once, gathering her balls of wool and big knitting-needles together with one quick sweep of the arm.

"All right, dear," said she, with another nod, giving him an anxious look....