The Way to God and How to Find It 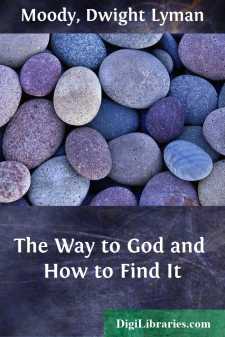 If I could only make men understand the real meaning of the words of the apostle John—“God is love,” I would take that single text, and would go up and down the world proclaiming this glorious truth. If you can convince a man that you love him you have won his heart. If we really make people believe that God loves them, how we should find them crowding into the kingdom of heaven! The trouble is that men think God hates them; and so they are all the time running away from Him.

We built a church in Chicago some years ago; and were very anxious to teach the people the love of God. We thought if we could not preach it into their hearts we would try and burn it in; so we put right over the pulpit in gas-jets these words—God is Love. A man going along the streets one night glanced through the door, and saw the text. He was a poor prodigal. As he passed on he thought to himself, “God is Love! No! He does not love me; for I am a poor miserable sinner.” He tried to get rid of the text; but it seemed to stand out right before him in letters of fire. He went on a little further; then turned round, went back, and went into the meeting. He did not hear the sermon; but the words of that short text had got deeply lodged in his heart, and that was enough. It is of little account what men say if the Word of God only gets an entrance into the sinner’s heart. He staid after the first meeting was over; and I found him there weeping like a child. As I unfolded the Scriptures and told him how God had loved him all the time, although he had wandered so far away, and how God was waiting to receive him and forgive him, the light of the Gospel broke into his mind, and he went away rejoicing.

There is nothing in this world that men prize so much us they do Love. Show me a person who has no one to care for or love him, and I will show you one of the most wretched beings on the face of the earth. Why do people commit suicide? Very often it is because this thought steals in upon them—that no one loves them; and they would rather die than live.

I know of no truth in the whole Bible that ought to come home to us with such power and tenderness as that of the Love of God; and there is no truth in the Bible that Satan would so much like to blot out. For more than six thousand years he has been trying to persuade men that God does not love them. He succeeded in making our first parents believe this lie; and he too often succeeds with their children.

The idea that God does not love us often comes from false teaching. Mothers make a mistake in teaching children that God does not love them when they do wrong; but only when they do right. That is not taught in Scripture. You do not teach your children that when they do wrong you hate them. Their wrong-doing does not change your love to hate; if it did, you would change your love a great many times. Because your child is fretful, or has committed some act of disobedience, you do not cast him out as though he did not belong to you! No! he is still your child; and you love him. And if men have gone astray from God it does not follow that He hates them. It is the sin that He hates.

I believe the reason why a great many people think God does not love them is because they are measuring God by their own small rule, from their own standpoint. We love men as long as we consider them worthy of our love; when they are not we cast them off. It is not so with God. There is a vast difference between human love and Divine love....