The Way of a Man 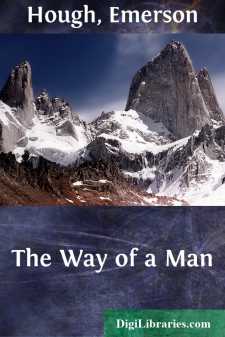 Chapter I - The Kissing Of Miss Grace Sheraton

I admit I kissed her.

After all, it was not strange. All things about us conspired to be accessory and incendiary. The air of the Virginia morning was so soft and warm, the honeysuckles along the wall were so languid sweet, the bees and the hollyhocks up to the walk so fat and lazy, the smell of the orchard was so rich, the south wind from the fields was so wanton! Moreover, I was only twenty-six. As it chances, I was this sort of a man: thick in the arm and neck, deep through, just short of six feet tall, and wide as a door, my mother said; strong as one man out of a thousand, my father said. And then—the girl was there.

So this was how it happened that I threw the reins of Satan, my black horse, over the hooked iron of the gate at Dixiana Farm and strode up to the side of the stone pillar where Grace Sheraton stood, shading her eyes with her hand, watching me approach through the deep trough road that flattened there, near the Sheraton lane. So I laughed and strode up—and kept my promise. I had promised myself that I would kiss her the first time that seemed feasible. I had even promised her—when she came home from Philadelphia so lofty and superior for her stopping a brace of years with Miss Carey at her Allendale Academy for Young Ladies—that if she mitigated not something of her haughtiness, I would kiss her fair, as if she were but a girl of the country. Of these latter I may guiltily confess, though with no names, I had known many who rebelled little more than formally.

She stood in the shade of the stone pillar, where the ivy made a deep green, and held back her light blue skirt daintily, in her high-bred way; for never was a girl Sheraton who was not high-bred or other than fair to look upon in the Sheraton way—slender, rather tall, long cheeked, with very much dark hair and a deep color under the skin, and something of long curves withal. They were ladies, every one, these Sheraton girls; and as Miss Grace presently advised me, no milkmaids wandering and waiting in lanes for lovers.

When I sprang down from Satan Miss Grace was but a pace or so away. I put out a hand on either side of her as she stood in the shade, and so prisoned her against the pillar. She flushed at this, and caught at my arm with both hands, which made me smile, for few men in that country could have put away my arms from the stone until I liked. Then I bent and kissed her fair, and took what revenge was due our girls for her Philadelphia manners.

When she boxed my ears I kissed her once more. Had she not at that smiled at me a little, I should have been a boor, I admit. As she did—and as I in my innocence supposed all girls did—I presume I may be called but a man as men go. Miss Grace grew very rosy for a Sheraton, but her eyes were bright. So I threw my hat on the grass by the side of the gate and bowed her to be seated....