The War Service of the 1/4 Royal Berkshire Regiment (T. F.) 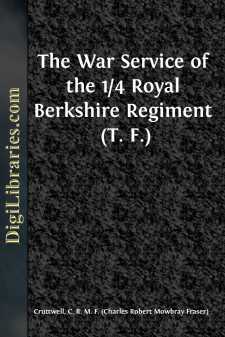 Late in the afternoon of August 2nd, 1914, the 4th Royal Berks Regiment joined the remainder of the South Midland Infantry Brigade for their annual camp on a hill above Marlow. War had broken out on the previous day between Germany and Russia, and few expected that the 15 days' training would run its normal course. It was not, therefore, a complete surprise when in the twilight of the next morning the battalion re-entered the same trains which had brought them, and returned to Reading. Soon after arrival, in accordance with orders received, the battalion proceeded to disband; but many of the men, unwilling to return to the distant parts of the county when further developments were confidently expected, remained at their respective armouries throughout that famous Bank Holiday. At last, at 7.20 p.m. on the next day, August 4th, the order for mobilisation was received, and conveyed throughout the county that night by the police and eager parties of volunteers. The plan of mobilisation had been closely studied in all its details, and worked with complete smoothness. By 2 p.m. on the 5th the assemblage at Reading was complete, and after a laborious day spent in medical inspection, drawing of equipment and of ammunition, 28 officers and 800 other ranks entrained in the evening for their war station at Portsmouth, while 2 officers and 65 other ranks remained at Reading to receive the transport from the remount depôt. At Portsmouth three days were spent mainly in digging, until a new move on the 9th brought the whole of the South Midland Division together at Swindon. Here on the 14th the battalion was invited by telegram from the War Office to volunteer immediately for foreign service. At this date the formation of the new service units had scarcely begun, and few realised how widely the common burden of responsibility would be shouldered in the next few weeks. The question, therefore, arose naturally in many minds, why those whose patriotism had led them without encouragement and sometimes with derision to qualify for the defence of the country in peace, should be the first called upon to extend their statutory obligation when emergency arose. None the less, within a few days a large majority of the men, and practically all the officers, had volunteered. History will, I believe, honour this prompt decision and recognise its value.

On August 16th, the division entrained for Leighton Buzzard, and the battalion spent four days in billets at Dunstable, 8 miles away, before setting out on the 20th on a 70-mile trek to its final destination at Chelmsford. In spite of the heat, the dusty roads and the small opportunities afforded since mobilisation for practice in marching, the journey was successfully accomplished in four days. The inhabitants of Stevenage, Hoddesden, Waltham Abbey and Fyfield, where we billeted in succession, to whom the passage of troops was still a pleasing novelty, and the provision of billets more than a business transaction, received us with every kindness....